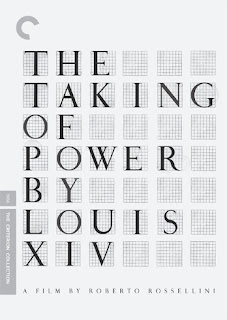 Roberto Rossellini's ultra-conscious approach to historical depiction deserves more than faint praise in this era of empty-headed myth making and culturally ignorant sentimentality. With an almost Bunuelian irreverence for dramatic logic (the camera often stays away from the decadent, thoughtlessly spoken characters) and a prescient aesthetic quite close to Robert Bresson's proceeding Lancelot of the Lake, Rossellini's detached precision is oddly intimate and rigorously considerate of the inescapable link between individual canonization and Nationalistic fervor. The trick comes not necessarily in the historical detail, as the filmic presentation. Meaning, simply reading the film's synopsis would be akin to perusing through a history textbook - all fact, no form.

Rossellini's brilliance comes in his ability to take an historical moment (here, the death of Cardinal Mazarin and the ascendance of young Louis), but refuse to make it "accessible." There are no cues for emotional highs and lows, no agenda-driven vilification of one character to meet certain dramatic ends. Every scene is pitched with a subversive degree of complacency, emphasizing banality over personal triumph. Try finding any such subtlety in The King's Speech. None of this should suggest Rossellini engages ambivalence or lacks a distinct comment for his work; wholly unconcerned with the "based on a true story" fetishizing (but nowhere approaching total disregard like Inglourious Basterds), he's able to liberate historicity rather than constrain and reduce it. His emphasis remains implicit, a self-constructing schema that desires interpretation and quietude over cut-and-dry posturing and finalities.
Posted by Clayton Dillard at 9:25 PM