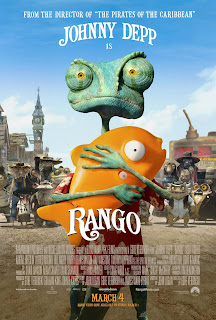 Give Gore Verbinski credit for not merely replicating the ho-hum fun of his lamentable Pirates of the Carribean films with Rango, easily 2011's most ambitious feature (behind The Tree of Life, of course). With his animated debut, Verbinski calculatingly culls many cinematic favorites (Leone, Chinatown, El Topo, My Darling Clementine are the central referents), gorgeously (and creepily) animates an anthropomorphized pastiche, integrating pop discussions of existentialism and morality. Rango boasts dialogue that, in these near-illiterate times, could only be called verbose, at a whip-snap pace. In abstaining from culpability with Pixar schmaltz, Verbinski inherently makes Rango a refreshing departure - it's just a shame the film becomes thematically unwieldy and, at times, subsumed by the monstration of its breathtaking animation. Not necessarily a bad thing given its texture and fullness, particularly when acknowledging the idiosyncrasy of each possum, lizard, or, even more frightening, giant snake, that gets a leering close-up.

The visuals transcend merely the weird by giving the titular character (Johnny Depp's best work since Ed Wood) a narrative grounding, methodically introducing peripheral characters, and convincingly conjuring a quest to send them on. Yet, there's a nagging problem with all of this, being that Verbinski is, essentially, indulging himself (as many recent filmmakers have) with yet another variant on "homage overload," collecting bits and pieces from various influences, making it explicit, and ultimately falling short of any discernible revision, much less one worthy of further consideration. Viewers should know something is slightly off when the spokesman for the film's recurring mariachi band says during the opening, "sit back and enjoy your low calorie popcorn." Too cute by a half, such an inclusion epitomizes a comprehensive disinterest in making Rango a truly daring mainstream work. Nevertheless, several sequences (such as a mid-film chase through the desert) are wonderfully captured (Roger Deakins acts as consulting DP for the animators) and as a visual work, Rango is unquestionably a masterpiece.
Posted by Clayton Dillard at 9:52 AM