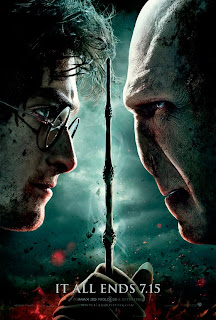 There's a moment in Harry Potter and the Deathly Hallows: Part 2 that seems to suggest a ravishing conclusion will follow; stranded with his peers and professors from the entire franchise in their beloved Hogwarts, Harry and the gang prepare for Voldemort and his crew's descent, recalling the genre perfection of John Carpenter's Assault on Precinct 13. I should quickly add that this moment is fleeting, however, since director David Yates instead negates any such visceral minimalism for Lord of the Rings carbon copy mayhem, replete with Titanic-esque moments of sentimental panic, destruction, and strained pathos. Such a sequence suitably summarizes a franchise that has been content to settle for easy moments of excitement (nothing in this film truly astounds), much less features a single sequence in its eight-film span that warrants notoriety beyond the sufficient. Even at the end, Harry Potter remains a poor-man's fantasy realm, serving up broad themes of regret, destiny, and mortality without ever convincingly addressing any social parallel, much less a compelling aesthetic vehicle.

There are moments in this final saga that approach sophistication, unfortunately stopping just short before reaching said destination. In particular, a surrealistic sequence involving Potter's interacting with deceased Dumbledore, concluding with the line, "If it's in your head, isn't that still real?" Transcending perfunctory existentialism, the line speaks with crude brevity to subjective vantage points, something that could easily have been explored by Yates in the formal presentation. Rather, he's content to represent Potter's final hour with workman banality, jumping between characters and motivations without any concrete rationality. Though the perspective belongs to Potter throughout, the form never compliments this shift in a sufficient way, relegating his genuinely existential feelings of displacement hollow or, at least, underwhelming. That's the whole of the Harry Potter finale - a woulda-coulda-shoulda affair that consistently falters in offering a jaw-breaking knockout blow.
Posted by Clayton Dillard at 3:49 AM