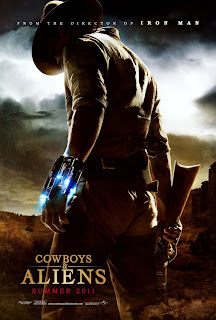 There's a scene two-thirds of the way into Jon Favreau's hopelessly inept, infuriatingly hollow Cowboys & Aliens where Jake Lonergan (Daniel Craig) flashes back to his being abducted by aliens, tortured, and equipped with some sort of laser-shooting contraption on his wrist. He writhes and squirms on the slab before bolting up and fleeing in pain. The scene gets a hand-held, docu-drama aesthetic shift from Matthew Libatique's portentous, dimly-lit cinematography, suggesting (perversely) some sort of visual connection with post-9/11 incarnations of media-obsessed international torture footage - forced subtext. Forced, in that what has preceded this despicably glib inclusion amounts essentially to narrative incontinence, overflowing with nonsense on top of nonsense, as genre mash-up collides with comprehensive genre misunderstanding. This is what you assholes deserve for praising those shitty Iron Man films.

Fact is, Jon Favreau might just be the most incompetent director ever allowed to helm a $100 Million studio production. Such a claim must be predicated on the recognition that Favreau is not without a certain degree of savvy - he at least knows to put big names around him (Spielberg, Howard, and Grazer get executive producer credits) and hires a cinematographer to make his film look like it's sophisticated. One need only peel back these easily crumbled layers to reveal his crux of novice interest - that being merely concept. He's a suitable director for these times of marketing fascism, where consumers mindlessly wander from product to product, week after week, blithely devouring the next "must-see" blockbuster, fitfully amused, but only because they're too chickenshit to dissent. That, and wholly unrefined in artistic appreciation.

Such a digression must preface a brief examination of Cowboys & Aliens, equal parts calculation and artistic dearth; if grossly self-aware dreck like Machete and Kick-Ass are cultural seizures, Favreau invites paroxysm against what his filmmaking stands for. For him, genre is merely a confluence of archetype and setting. Infatuated with facade over feeling, he's content to indulge inanity for the sake of satiating a simplistic physiological fetish - posturing imagery, images as a means to an end; he has not the slightest eye for movement or awe. His tricks are merely grade-school antics compared with the stupefying visceral one-hour finale of Michael Bay's Transformers: Dark of the Moon. Oddly enough, scribes Roberto Orci and Alex Kurtzman also helped pen this...thing (alongside six others!), but the shoddy incongruence lies solely upon Favreau's shoulders, seething in every single frame, simply an idea (a dickhead one, at that) in search of anything resembling human action, thought, reaction, creation. Supplanting even comic book superficiality (not a yeoman's task), this isn't "dumb fun" (is there even such a thing?) so much as a black hole where the cinematically forsaken form for a call to worship.
Posted by Clayton Dillard at 11:19 PM