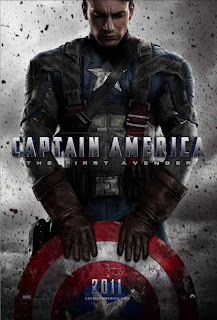 Captain America: The First Avenger is the corporatist, Hollywood-franchise machine at its most egregiously barren, hiring competent (the most overrated superlative of pop movie critic lingo) director Joe Johnston to craft a thoroughly adequate, formulaic, and (thus) vanilla production, designed and manipulated to suck any and all idiosyncrasy from its straight-forward aesthetic, even more so any cultural and/or historical astuteness. Much like Thor, another Marvel tentpole to preface the soon-to-be mammoth The Avengers, there's little here for a viewer to like, much less love - and theoretically, there's little to hate. That's the franchise way - as long as you don't piss them off, they'll come calling for more later, on the promise of excellence, like a bird that keeps crashing into a window, thinking the glass has finally disappeared. Of course, this promise is predicated on an alternative brand of excellence - technical proficiency and narrative logic. They look at it this way: give the film a slick aesthetic (here smoky and gray because, you know, that's how things looked in the 1940's), provide an "inspiring" underdog character, give him a love interest, throw in the uncertain but ultimately accepting father figure, and set-up a villain with will-to-power interests via global domination, though faltering because of narcissistic tendencies...voilà!

At least it won't elicit statements like, "the worst film I have ever seen," something I heard a recent attendee claim about The Tree of Life. And that's precisely what studio-heads want: a perpetuation, a seemingly endless cycle of superficial films, showing allegiance to cynically devised metanarratives that simplistically (and, in terms of form, causally) depict action, desire, and consequence. Viewers are now brainwashed robots, disparaging (and unable to recognize or feel) artistry and passion, then extolling hackneyed, endlessly redundant pop fare. Such a culture calls for pugilism over compassion - sickeningly unimaginative. Critics are equally to blame, afraid to speak up (or, even worse, just exaggerated versions of the brainwashed viewers) because they face a backlash in readership. If the body of critics across the country truly finds Captain America worthy of a single viewer's time and consideration (at last check, it sits squarely on 74% at Rotten Tomatoes), then we're truly in the dark days of socio-cultural sophistication.

There's a central paradox Johnston fails to probe - the proliferation of "all for one, one for all" militarism (which Captain America endlessly drudges out - not to mention hero worship), but mindless finger-wagging at the numbingly archetypal Nazi villain. An early scene laughably imitates Christoph Waltz's Col. Landa - only it isn't meant to be satirical. That's the issue plaguing much of Captain America, a consistent negation or, even simpler, non-recognition of its inherent responsibility to take history seriously, either through a vision infused with nuanced conviction, or radical revisionism, turning myth into fantasy, identifying the thin line between the two. Nah - to quote a friend of mine: "In Captain America, he has his shield and pretty girls and the trains go boom boom and the bad guys go dead dead, and the world goes save save, and the guy gets strong strong." This movie sucks sucks.
Posted by Clayton Dillard at 11:25 PM