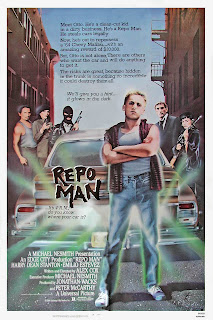 Repo Man holds its status as a cult classic firmly - but it deserves more than that, since it's one of the greatest American films of the 1980's, a Carnivalesque emanation of a burgeoning postmodern ethos, told via a tightly wound narrative of punk/youth culture run hilariously amok, amidst larger issues of cultural homogenization and consumerist uniformity. Moreover, Cox's film is masterfully in-touch with its own convictions and sensibilities, nearly every line of dialogue funny and consistent, nearly every scene an extension of either thematic or character dilemmas. Take Bud's (Harry Dean Stanton) proclamation: "Look at 'em, ordinary fucking people, I hate 'em." Not only a rallying cry for disavowing the status quo, the film navigates its rebellious vernacular with thorough aplomb, using language, image, and wonderfully alternative (perhaps abrupt) scene transitions to comprehensively offer a different kind of vision, one that's distinctly uncanny in its ability to appropriate (and transform) mainstream filmmaking practices. Repo Man's satirical through-line applies to more than generic food labels, TV Evangelicals, and Punk thoughtlessness - by drawing upon various cinematic genres, Cox inherently critiques limited artistic expression, completely resetting the table of possibilities by radically reasserting humor and chaos as central to societal growth - not Reaganite political drones. When Duke says: "Fuck this! Let's go do some crimes," it's the film's most prescient line of dialogue, hilariously suggesting societal rebellion as a means of merely reasserting individuality - obviously just as brainless as unquestioned uniformity, but Cox is not a judge of character, more an extraordinarily acute surveyor of a socio-cultural zeitgeist.

Without having seen any of his other films, it doesn't seem like too much of a stretch to say that Pale Flower is Masahiro Shinoda's masterpiece, one of the most jaw-droppingly focused, composed, and powerful films of the Japanese New Wave - and perhaps all of cinema. Every frame radiates energy, suggesting a grander kineticism and transmutability beneath, where the cinematic art form comprehensively reflects human affect and essence. The use of diegetic sound hones this artistic drive, put to no greater use than in the film's opening sequence, a bravado introduction to an allegorical underbelly of crime and corruption; yet, Shonoda's focus remarkably reconstructs genre archetype, using the release of a criminal from prison (standard fare) to implicitly question how such templates can be altered, manipulated, and fitfully applied to deal with far greater social and artistic issues. Every sequence, scene, and shot is an ontological suggestion, relating to various Lyotardian meta-narratives, where the text stands on its own (certainly), but extends to address adjacent and hovering implications regarding the construction of knowledge and experience. To call Pale Flower a "gangster film" is to reduce its scope and its aspirations beyond the cinematic. Nevertheless, Shinoda is not a cocksure deconstructionist, merely probing form and meaning. Though formally profound, the film integrates its various interest in such a streamlined manner as to negate any claims of willful irreverence, simply for the sake of it. Shinoda's vision for cinema's capabilities is no punk move - he's a full-blooded iconoclast, genuinely having both something incredible to say, and knowing precisely the methods to achieve it. A staggering achievement.

To appreciate Woody Allen’s latest film, it is necessary to accept its premise on its own terms. Meaning: an evocation of artistic fervor, self-knowledge as tied to those who have unquestionably developed one’s own psychology and worth. What might seem like dodgy terrain in theory plays effortlessly enthusiastic – the most euphoric kind of fantasy, rooted in personal identity rather than communal angsts. Certainly, the laundry list of name-drops is enough to give any intellectual a bit of nausea and be inclined to roll the eyes more than a few times – but Allen embraces his unashamed premise so wholly that to deny its jubilee is both unmerited and callous. There’s nothing threatening about the film, but therein lies its beauty, unassuming in the way of Rene Clair’s Under the Roofs of Paris, where such human vitality trumps conscious objection.

Unquestionably the film that changed documentary filmmaking in terms of fearless investigation, Frederick Wiseman’s first film is loaded with an undercurrent of satirical melancholy, feeling a wide range of frustrated emotions at the scenes captured, yet never failing to offer a vantage point, even though he never says a word. The integration of a titular song and dance routine, which repeats throughout, slyly (and boldly) suggests the cruelty of mankind as fodder – only to comprehensively redefine the word’s bounds through extensive sequences of psychological investigation, physical torment, and the frightening convictions of the mentally disturbed. Moreover, as an historical expose, Wiseman’s film is invaluable, depicting the unthinkably cruel and real scenarios inside mental health facilities – but also consistently questioning both how documentary film can reveal such destitutions (social/psychological “ugliness”) and never blinking in the face of literal madness. Disturbing and devastating, but the epitome of essential.

Dark Victory, or Spoiled Bette Gets a Brain Tumor, beats its melodramatic drum with such dim-witted glee, that it neither morphs into a lurid hot-flash, nor a streamlined shriek of feminine ennui. Instead, director Edmund Goulding languidly executes the medical bent (woefully dated at this point, to boot) and finds no excuse to let Bette live beyond her midpoint brain surgery. For some reason, everyone loves this shrew, and Goulding neglects to address the obvious metaphor: self-entitlement as social cancer, narcissism as alienation. Nope, the last hour tediously ticks away, seemingly oblivious to the film’s inherently flawed premise.

Neil Labute presents self-absorption (and, thus, self-destruction) as the only response to a time without genuine meaning or feeling – his nihilistic characters are consistently played (brilliantly) as emanations rather than critiques, thus making their pitiful attempts to sustain human sexual connections all the more lamentable. The arrangement is only seldom strictly lewd (Jason Patric’s sauna confession being the primary offender), but perhaps it reinforces Labute’s underlying modus operandi, where taste (and by extention, all sensory decency) falters when cruelty reigns. After all, any misanthrope hates himself as much as the rest of humanity, something Labute understands and communicates nicely, enabling ironic compassion even as his characters are imprisoned by imitation and social mores, all of which derive from their own narcissism, masquerading as self-awareness.

Possessed is owned by Joan Crawford, elevating a rather pedestrian premise of social ladder games and melodramatic dialogue, much of which is amusing, if slight. It is Crawford's performance that makes the film more delightful than it has any right to be, especially since director Clarence Brown only sporadically displays the visual aspirations in his silent Garbo masterpiece, Flesh and the Devil. Which is not to imply the film lacks merit in terms of playfulness or theme - there's a consistent address to double standards, as when Crawford says: "Why should men be so different? All they've got are their brains and they're not afraid to use them. Well neither am I!" Hardly subtle, but it is Crawford's sincerity that emanates beyond the dialogue's frankness, instilling a palpable degree of pain and regret which transcends high-strung histrionics. Despite the film's flaws, Crawford is always convincing: the epitome of grace, beauty, and classiness. Where have such movie stars gone?

Though detached in Watkins’ usual style, Privilege maintains a perverse degree of engagement, almost more fascinating because the director uses the medium against itself, denying the viewer’s ability to pleasurably “enjoy” its narrative of cultural obsession gone awry. It works precisely because Watkins suitably matches form and content, disabling a biopic ethos which would necessarily mythologize. The difference between something like this and Soderbergh’s Che is that Watkins has talent.

Seagal is a proper action star, but his “acting” debut is muddled in a film that neither adequately lets him demonstrate his ass-kicking proficiency, nor provides any discernable narrative other than the requisite conservative jargon, which Stallone put to better (at least, more exhilarating) use in several of his 1980’s flicks. Watch the trailer instead – brevity is certainly preferable in these cases.

Detestable in many ways, The House of Yes lacks fortitude on aesthetic, moral, and logical levels. The scant runtime could have been even scanter, especially since director Mark Waters proves inept at transforming the one-act scenario into anything more compelling than a series of 3rd rate glances and exchanges, little of which resembles anything remotely insightful or artistically taut. Parker Posey navigates the muck well, but even she doesn’t come close to making a single scene worthwhile, much less salvaging this embarrassing effort.
Posted by Clayton Dillard at 10:27 AM