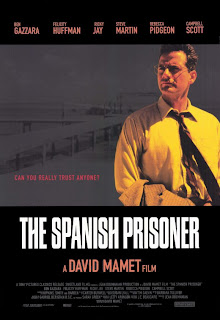 There's a playful intelligence running throughout the entirety of David Mamet's The Spanish Prisoner, so much so that it approaches an almost overwhelming delight (physical as much as cerebral) as the director consciously (but not explicitly) produces a work functioning as both cultural artifact and virtuoso ingenuity. It's enough to make one completely forgive the egregious missteps of House of Games - here is genre filmmaking on the edge, oddly perverse but restrained, exhilarating but understated. Mamet doesn't so much wear his influences on his sleeve as under his hat, deftly suggesting dozens of classic films without ever actually pointing directly (unlike Soderbergh's The Good German, one of the worst films ever made). Layering formal excellence, amusing metaphors, and truly Wellesian, overlapping dialogue, it's Mamet at his most enjoyable, but also his most sincere, spinning a yarn while questioning narratological legitimacy, as well as the director's own role as puppeteer, manipulator, and con-artist.

J.J. Abrams's Super 8 is a striking, vivid example of the Blockbuster virus, where a well-drawn, compelling coming-of-age narrative is sullied, worn-down, and made almost completely tiresome by the hackneyed integration of a worthless sci-fi element, which culminates in tedious monster-movie carnage, combined with the adolescent wonder and Spielbergian awe Abrams is so clearly indebted to. The film's first third is quite good, capturing the artistic spirit and humor of its youthful cast with ease and grace - effortlessly delightful. However, as if it were a nervous tick, Abrams consistently undermines narrative progression through hollow sci-fi suspense, devoid of any real expositional meaning, other than to turn his "small" story into a "big" story. Abrams's sensibilities tend towards indulgent nostalgia and transient sentimentality, but the presence and performances of the young cast members, particularly uncanny in their ability to look and sound like 1979 small-town kids, adequately compensates for Abrams's errors, even though the film runs at least 20 minutes too long.

The first 10 minutes of Fast Five are everything an action movie should be - terse, elliptical, and visceral. What follows the brilliant opening is pure cultural product, a series of middlebrow chase sequences, shootouts, and faux-pithy exchanges, off-set by thinly drawn, sentimental gravitas (familial reminiscences, pregnancy). Moreover, the film panders to its socio-cultural demographic, fostering pugilistic masculine and sexual roles (though the film's playfulness negates any offense) and facilitates ethnic behavioral stereotypes with enthusiasm - problem is, none of it plays with conviction, right down to the uniformly worn "Under Armor" shirts by The Rock and his team. It's all been manufactured. There's very little interesting here, much less challenging, but were director Justin Lin given a chance to make a truly avant-garde action film, there's no doubt he has the sensibilities to pull it off.

X-Men: First Class is a stunningly inert excuse for an action film no matter which angle you come at it. Visually, director Matthew Vaughn has no distinct aim, sometimes shooting in washed-out gray and blue, others going much brighter, but with little consistency or discernible purpose. He prefers cuts to camera moves - fine, but it stagnates an already lifeless composition. In terms of content, the script (credited to four scribes) is all over the place, attempting to juggle nearly two dozen characters, cold war anxieties, and a pathetic allegory for homosexual discrimination (asked why he didn't reveal he's a mutant, a character says: "You didn't ask, so I didn't tell."). Bits and pieces are cut from each thread here and there, as if merely restating the same phrases and themes means a discourse is being constructed. The cast is an embarrassment (the only person who more than acquits himself being Michael Fassbender, perhaps the sexiest, most elegant male actor working today) and slog through most scenes with either whiny angst or pouty-faced gloom. It's a two-hour pilot for the CW masquerading as cinema - and filmgoers deserve much better than this hodge-podge of ideas, sensibilities, and frequencies.

If Fast Five and X-Men get slaps on the wrist for franchise nonsense, Thor deserves a mallet to the grill. Here's a flick that's so busy setting up its characters for the upcoming The Avengers film in 2012, that it neglects to find a reason to exist on its own, sloppily assembling some make-believe story about a gargantuan and his brethren, who exist on some make-believe planet, only to suddenly find himself CAST OUT! and sent to Earth, where he stumbles into three scientists, none of which can figure out why this fellow acts so darn peculiar. Fish-out-of-water hijinks, combined with silly, bloodless action sequences, juxtaposed with the twinkly-girlish sexual feelings of the Natalie Portman character, makes one question what could have compelled the usually sharp, keen eye of director Kenneth Branagh to make such dopey, adolescent drivel.

Lightweight would be a kind way to describe Wonder Boys - let's go with aggressively inconsequential. Moreover, here's a textbook case of a screenplay that's been "written" into oblivion, neatly organizing character neuroses into slight ticks and condensed dialogue/scenarios, meant to seem taut, instead of contrived, which is what it is. The film expresses the plights of an aspiring writer (and the cast of characters he associates with/encounters) with postcard depth, settling for convenient ironies and sour situational humor over any sincere attempt at introspection. From the lazy voice over to the down-and-out to up-and-at-em' narrative arcs, it's one massively cloying mechanism, concocted by scribe Steve Kloves (the writer of all seven Harry Potter films) and one of the reigning kings of the Hollywood middlebrow: director Curtis Hanson.

A sincere genre film that addresses socio-cultural dilemmas as much as it revels in slo-mo shootouts (John Woo and Michael Mann are undoubtedly the cinematic referents), Takers is undeniably coarse, but it doesn't front, offering a refreshing aptitude for navigating pop gravitas, pretentious but rooted. It takes the convictions of genre seriously, not quite on the level of Walter Hill or Sam Peckinpah, but somewhere adjacent in spirit, as each character grapples with his own masculinity, morality, and mortality. The logistics are a few clicks off at times (director John Luessenhop has trouble with consistency), but between several compelling exchanges (Idris Elba and T.I. give the strongest performances) and suitably kinetic sensibilities, it more than supplants the drove of jokey, smug actioners genre fans have had to endure for the last decade.

To the susceptible eye, Myra Breckinridge would seem like potent farce, brazenly flaunting Hollywood conventions, good taste, and expressing a fervent irreverence for traditional notions of identity formation and sexual behavior. Keen viewers, however, will wade through the gorgeous cinematography, ingenious use of film clips (opening with a song and dance number from Shirley Temple), and highfalutin political rhetoric to reveal a temper-tantrum at the core, puerile in its "spare no one" aim, devoid of pain or a palpable sense if injustice - satire's central genesis. Director Michael Sarne does one thing brilliantly, using an eclectic lot of classical Hollywood clips (often placed without rationale) to implicitly suggest indoctrination through visual consumption, the mores and fabric of a microscopic few as exemplars for the macro - a worthy satirical revelation. Problem is, Sarne negates much of the impact with his "everything but the kitchen sink" mentality, not so much Carnivalesque as carnivorous, each subsequent scene devouring the previous, as the director's uncertainty in destination and purpose begins to show. Satire is (or can be) more than a slew of semi-cogent ideas slapdashedly thrown on the screen.

Though a marked improvement over Above the Law, Seagal essentially enacts an identical scenario as ass-kicking vengeance seeker, here against a lot of Jamaican drug lords, with the effervescently macho Keith David at his side. The action is streamlined and the narrative suitably clichéd – but it’s still a remarkably lazy effort, as hilariously indicated by the film’s final shot, where the guys having just killed the last baddie, simply walk away as the credits roll.

Director Florian Serban certainly feels his tale of societal injustice, juvenile delinquency, and the inescapable restraints placed upon such individuals, but he has nothing nuanced to communicate, nor the formal sensibilities to dramatize. His style is part Dardenne brothers personalism, part indie hysteria - and neither transcend the bitter taste of imitation, a filmmaker attempting to further come to grips with his own aesthetic sensibilities, rather than maintaining a firm handle or vision. The narrative hits various poverty porn beats, nearly fetishizing dysfunction and despair to the point of perversion. A compelling lot of ideas and themes are certainly swimming somewhere around in the director's mind, but he's simply ill-equipped to convey much of anything with a sure-handed artfulness.
Posted by Clayton Dillard at 10:24 AM