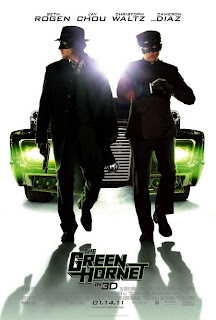 Aside from an expected degree of self-awareness, little separates Michel Gondry's The Green Hornet as a distinguished genre work. One wouldn't even be able to tell it's the director's film were his name not on the credits, since less than a handful of scenes alter, challenge, or defy conventional presentation. Moreover, the script by Seth Rogen and Evan Goldberg, while sporadically amusing and insightful regarding both genre heroics and media distortion, lacks comedic consistency and fails to make Britt Reid (Rogen) even remotely compelling. The film's highlight is Jay Chou as sidekick Kato, a fleet physical presence, not bad comedically either, but nothing about the film dazzles, even if it remains intermittently amusing throughout. Given the real-world setting, Gondry's pedigree would suggest at a bare minimum, a solid film should have manifested. What's on screen instead is silly, limp, and not playful enough to be any real fun.

Deliberately evoking the minimalist mold of John Carpenter, Brad Anderson's Vanishing on 7th Street works in a similar way to J.J. Abrams' Super 8, in that it's a rather adept imitation of each filmmaker's boyhood idol. However, while Super 8 may be slightly more functional as easily digestible pop entertainment, Anderson works on a tougher scale, integrating sincere economic and existential anxieties into his rather ordinary apocalyptic scenario. Set in the streets of Detroit, the locale has a distinct allegorical place, as darkness sets in, often only the flickering headlights of cars (and thus, the flickering out of the automobile industry) as a source of safety. Sparse music cues, an almost complete lack of jump scares (a miracle these days), and a building sense of dread place Anderson above many of his contemporaries, in that he at least understands the convictions (formally and thematically) of the genre he's working in. While nowhere near the ranks of Carpenter's best, it's terse, tense, and has something on its mind.

Nothing about I Saw the Devil extends past pretense. The violence, vengeance, and brutality are conducted to merely titillate, with requisite solemnity and faux-introspective shots meant to intimate deeper, spiritual lacking. They do not. Only gorehound freaks who love horror for its blood rather than its convictions will be excited and fooled. Moreover, director Ji-woon Kim bloats an incredibly basic premise (man's finace murdered by serial killer, seeks revenge) to an indulgent, perverted, and nonsensical length (142 minutes), quite an embarrassing choice after Joon-Ho Bong's Memories of Murder, a humane, thematically rich film about obsession, excavating nuance and compassion out of horrific, morbid material. Kim is content to exploit while being superficially caustic, castigating violence and gruesome retribution while indulging it at every turn. Soulless material for soulless moviegoers.

The excesses of excess are reached by Michael Bay's Transformers follow-up, a two and a half hour labyrinth of warring robots, intergalactic exposition, lame jokes and sight gags, governmental jargon, endless uses of hi-tech military weaponry, and yes, Megan Fox's body. Whether intentional or not, Bay's opus plays like parody and self-critique simultaneously, hurling these numerous elements into one giant Americana pan, and simmering to (im)perfection. Needless to say, many scenes, sequences, (hell) maybe even the entire film doesn't work - but even admitting that, there's a chaotic persistence and odd charm to the whole thing, seemingly honest and unorthodox, whereas other Blockbusters walk a tight-rope of formula and political correctness. As always, Bay's eye for visual wonderment remains intact, but only in small doses, since he can't manage to string together a prolonged sequence of compelling action set-pieces, sans the desert denoument. Unwieldy doesn't begin to explain it - but Bay's filmmaking rarely takes a break, making even his bad decisions far more interesting than the boring, easy ones made by 3/4 of the other action directors working today.

As if to wholly rebut the sexy, Romanticized cold war spy mythology of the first few James Bond films, Martin Ritt's adaptation of the John Le Carre novel removes all passion, fun, and joviality from the proceedings - at least, in terms of his protagonist's (Richard Burton) worldview. While deliberately distanced from the material, Ritt rigorously and tightly composes shots, allowing his mise-en-scene to evoke spiritual crisis, much like the formal aspirations of Ingmar Bergman. In fact, many scenes recall Bergman's ascetic visual space, and while Ritt lacks the intangibles to make such scenes more than simply style, his sensibilities maintain a palpable lament, supplemented by Burton's washed-up face, emanating a lifetime of pain and regret. The ending is quite silly in its mostly unearned straight-faced tragedy, but scene-in, scene-out, Ritt's film earns its chilly title.

Coppola's methodical tale of cultural and political paranoia resonates through the crisis of its central character, rather than formal or thematic emphasis. Certainly, Coppola maintains a firm grasp on both (modern audiences will likely get restless fast with the deliberate pacing), but it's Harry Caul (Gene Hackman) that's in nearly every scene, much like David Hemmings in Blow-Up, slowly deteriorating spiritually and losing faith in an altruistic humanity. While Coppola's film lacks Antonioni's precise, cheeky eye for bittersweet irony, the underlying tone and sense of loss build to a gripping, but still understated climax, suggesting a nightmare of imprisonment with little to no end in the foreseeable future.
Posted by Clayton Dillard at 12:12 AM