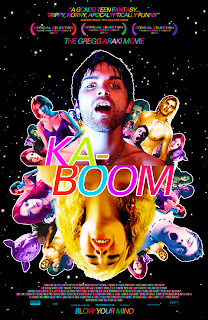 Gregg Araki's kaleidoscopic tale of young lust, ennui, and angst is also a perversely subversive rebuttal to both Indie and Hollywood filmmaking, where sex is either sugar-coated or ignored altogether. It may be the director's most accomplished satirical work to date - though Mysterious Skin remains his magnum opus, Kaboom intricately sets itself up as playful auto-critique, especially in the final third, when literal apocalyptic doom becomes a credible threat, inherently making fun of Blockbusters that take such spectacle-driven nonsense seriously. That the protagonist's roommate is named Thor is not a mistake - Araki is fusing his own intimate pop sensibilities (what must unfortunately be called esoteric) and imploding them (thus the title). The results are giddy with sophistication: Kaboom does to the summer Blockbuster what Scream did to the slasher film.

Sharper, cannier, and (shockingly) more adult than any superhero adventure since The Dark Knight, Green Lantern is an entirely different beast, but epitomizes what a summer Blockbuster should strive to be in terms of pop spectacle. There's a kinetic energy driving Martin Campbell's class A production, a gloss that shines not just in the gorgeous CGI world, but in more intimate scenes too, consistently prizing visuals over content, which the film treats accordingly as mostly filler for its dizzying array of sexy sensibilities. It's like classical Hollywood made a CGI superhero movie - taut, attractive leads (who actually have a sexual history), mad scientist become hilariously obsessed and disfigured, and sonic-driven action sequences that have a definitive rhythm. Green Lantern is the best wide-release film of the summer (which isn't saying much), but that back-handed compliment should not misconstrue its genuine enthusiasm and vitality.

A regurgitation of action movie tropes, slathered in excess - Drive Angry is bloated kitsch, misunderstanding the ethos that "drive" cinema's most maligned genre. Instead of the brilliant formal revision applied by Nevaldine/Taylor's Crank films, director Patrick Lussier makes the same mistakes as with his My Bloody Valentine remake, electing for unsophisticated mugging and winking, treating his film as an ephemeral theme-park ride rather than a critical work. Are there yucks, groans, and absurdity? Without question, but lacking even a moderate degree of sincerity behind them, what remains is hollow and puerile, fit only for viewers with a novice's sensibilities, unable to distinguish genre critique from genre diarrhea.

Sociopathic narcissism is par-for-the-course in Neil Labute’s world – yet one would be remiss to label this cynic a misanthrope, since his formal ambitions reflect the inescapable pain and banality (conveyed mostly through long, stagnant shots) present when “because I can” mores dominate social interaction. Give Labute credit for keeping the proceedings on an even keel, scathing without histrionic pandering or fashionable ambivalence. There’s a steady indictment of both unchecked assholery and its passive acceptance (after hearing Eckhart’s deranged plan, sheepish best buddy Malloy can only fashion a “sure”). Labute isn’t embracing anomie – he’s recognizing its presence and, without moralizing or trivializing, plants his tongue firmly in his cheek, takes a step back, and lets the material speak for itself.