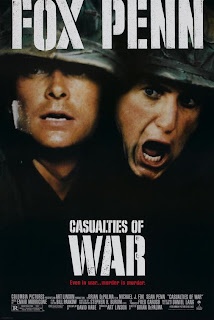 Casualties of War is Brian De Palma's most morally complex film, situating itself within a melodramatic ethos, utilizing soliloquies, Ennio Morricone's elegaic score, and problematizing character identification, genuinely revealing the scenario's (and the war's) immense absurdity - not through anti-war polemics, but harrowing dramatics, the image as devastating as the narrative. Moreover, De Palma reiterates his fascination with dreams (nightmares), having Michael J. Fox's haunted soldier recollect the events while half asleep on a train, stable, forward movement juxtaposing the fractured, conflicted psyche of a man who "did the right thing," but still can't sleep at night. However, the film transcends any simplistic renderings of meaning because of De Palma's rigorous compositions, canted angles, steadicam shots, and blurred split-screen as paradoxically enabling and restricting vision - one's perspective is limited to his/her own subjectivity. In a most provocative sequence, the attempted blowing up of a latrine is (initially) completely seen from the culprit's perspective, not just a "gimmick," but a reflection of how fragile and easily identification can be shifted. Cynics may find De Palma's moral questions "obvious" or "corny," but to claim so is to miss the film's greater suggestion - the mutability of morality based on context and scenario. Yet in a blistering finale, De Palma refracts that notion back onto itself, a feverish, devastated lament for wasted humanity that challenges as much as it horrifies.

Brian De Palma's gangland melodrama transcends its macho trappings via a virtuoso blend of visual prowess (which can only be called passionate) and utterly cinematic posturing, gun-waving, cigarette smoking, and method acting as poetry, an even more elegant variant on John Woo's preference for bullets and pathos. Noirish to the core (but not limited by those tendencies), it's potentially De Palma's most fully formed pastiche, drawing upon numerous cinematic influences, but recognizable as wholly his own, a mature, auteur film that seems almost embarrassingly effortless - it's the work of a master, alluding to the likes of Jean Pierre-Melville and Jules Dassin, but only in essence, sensibility (De Palma's too advanced for explicit homage). No one "sees" quite like De Palma, his camera consistently challenging convention, deliriously fluent at its most radical. Tales of the aging gangster are always preferable to those of the youngin', and coupled with Pacino's wild-eyed intensity and David Koepp's preposterous script, Carlito's Way finds De Palma turning product into art, a thoroughly absorbing firecracker, giddy with sophistication.

Walter Hill's directorial debut is remarkable for the simple fact that he's already so vividly keyed into his chosen discursive form: tough men grappling with social hardship, morality, and expressing it via primal bursts of violence. Bronson, Coburn, and memorable fight scenes would be enough entertainment wise - but Hill consistently grounds it with legitimate real world/character issues, not some inane piece of pop nonsense like Bloodsport (Van Damme's masterpiece). Lament the days when genre fare had grit, bite, and set out to do more than comment on other genre films. Hill is one of the most underrated directors of the last 30+ years, turning out one thought-provoking film after another.

Arriving 11 years after The Wild Bunch, Walter Hill's re-telling of the James Gang myth reinvigorates a dwindling sense of masculinity within American culture, harkening back to Fordian decorum and chivalry, yet equipping it with Peckinpah's flare for the violent fantastique, myth and legend in place of actual fantasy. Moreover, Hill's deft hand makes these anti-heros neither idols or villains, rather questioning the capabilities of any historical representation - historicizing necessarily glorifies. Nothing about this concept is new (even 30 years ago), but as with all of Hill's work, he layers a compelling narrative of trust, brotherhood, and societal unrest with a grander sense of meaning, using the genre template to reveal human truth - not wallow in redundant tropes (superhero pap, here's looking at you) or sillily cannibalize itself (every pseudo-self aware piece of shit from the last ten years).

Basil Dearden's racially conscious murder mystery inhabits many qualities indicative of "liberal condescension," positing racism, bigotry, and prejudice as capable of being reduced to a mere few lines of dialogue, then solved by a simple act of rational connect-the-dots. Such scenes "work" in the cinematic sense, but play wholly and totally false in terms of honestly addressing race relations. Think of Brokeback Mountain as the modern form of this narrative, where racial (or homophobic) prejudice is carefully inserted into the narrative, rather than springing from it organically. Moreover, it's been calculated to produce a result, rather than reveal anything about human nature. Furthermore, the thrust of the mystery is performed with no more nuance and expertise than any run-of-the-mill television hour. For an example par excellence, the closing line of the film: "We didn't solve anything: we just picked up the pieces." Yet again, heavy-handed double meaning and arrogant liberalism passing as modesty do not a palatable film make.

After viewing the highly sophisticated and influential The League of Gentlemen, modern incarnations of the heist film (specifically Heat and The Town) seem downright silly and obnoxious by comparison. This is not to say they aren't (and I specifically mean Heat) indicative of an alternate, gritty-realist aesthetic, preferring nihilism and decay over camaraderie - and, to be honest, Michael Mann's faux-epic via an LA wasteland is much more ludicrously compelling than Basil Dearden's one-last-mission yarn. Nevertheless, Dearden has something sincere and honest to say about post-war assimilation, and he does so by teasing out dignity, honor, and humanity, rather than relying on hyper-violent set pieces and Al Pacino's histrionics. If Dearden's film ultimately feels slight (and it does), his efforts shouldn't be penalized or viewed as unsuccessful, since his inclination towards understatement often rewards viewer patience.

One of the most interesting of all modern Shakespeare adaptations. Basil Dearden takes Othello - the general narrative, at least, and places it over the course of a single evening, celebrating the anniversary of a Jazz musician and his singer wife. What's impressive is that Dearden never lets the well-trodden territory dull, genuinely asking if (and how) classic texts have relevance in contemporary art, especially when in times of political and societal upheaval. The film plays surreal, especially in its one-act play conceit, transcending the condescension of Sapphire by making race implicit, rather than explicit. In fact, Dearden's restraint here is remarkable in terms of not over-emphasizing the racial elements, using camera movements and several well-placed jazz numbers to suggest something grander than polemics. Bravo.

As with usually anything touched by the hand of producer Judd Apatow, Bridesmaids is at least half an hour too long, has no cohesion whatsoever in its comedic tone, and carries little insight into relationships outside of some peculiar idiosyncrasies. Having said that - the movie is pretty damn funny, though it relies on "randomness" and bizarre behavior over organic progression. Sloppily directed and seemingly 80% improvisation, there's never anything remotely compelling or particularly interesting about the narrative, since it settles for the typical high's and low's - fights and bickering giving way to hugs and friendship. Kristen Wiig is excellent (as always) and Melissa McCarthy certainly gets the biggest laughs - but again, nothing is ever built upon emotionally or comedically, and that lack of momentum makes the third act particularly tiresome.

To say that seeing The Good, The Bad, and The Ugly in 35mm is close to a religious experience would not be quite accurate - it's way better than that. Leone's sardonic vision of the West reaches its most exhilarating stage here and needs to be seen on such an expansive scale, with Ennio Morricone's iconic score blasting through the speakers. A definitive cinematic landmark, exploitation hybridizes with formal excellence - a visceral masterwork, through and through. Such a viewing also vividly enhances the enormous influence upon Quentin Tarantino, especially the opening scene of Inglourious Basterds, which is essentially a duplicate of the initial appearance of Angel Eyes (Lee Van Cleef). Leone's brilliance is in his playfulness, a virtuoso yarn that thrilling uses character as narrative, the three central characters as fascinating variants on genre archetype - each delightfully and hilariously played by Eli Wallach, Lee Van Cleef, and Clint Eastwood. It would be hard to find a film as rigorously intelligent and entertaining.

Speaking of religious experiences, Werner Herzog's vision of nation building, obsessive self-destruction, and the possibility for transcendence plays both humorous and horrifying - a certain precursor for Coppola's humorless horror in Apocalypse Now. Herzog imbues his film with lyrical, meditative beauty, yet consistently subverts it with both nature and mankind's brutality. Rather than offering simple juxtapositions, the film ambivalently allows its images to speak for themselves, a haunting score as devastating supplement. Klaus Kinski's eyes sear menace, able to convey inexorable desire - as are his harsh, deranged line readings. In many ways, Herzog strives to unveil the absurdity of desire, especially when cultural transmission and feigned notions of morality dominate. Spiritually absent (though claiming to be Christians), the Spanish expedition embodies absolute futility, each wave moving them forward pardoxically leading further and further into the abyss.
Posted by Clayton Dillard at 4:45 PM