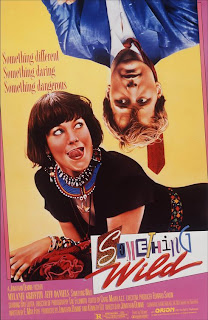 Jonathan Demme navigates difficult territory in Something Wild, wickedly combining broader comedic elements with deeper understandings of compulsive relationship drives and behavior, before convincingly shifting gears into the realm of horror and obsession. Much like, say, Elaine May's The Heartbreak Kid, Demme's characters are imperfect creatures, letting emotions lead them astray, with their inadequacies and errors fully progressing the narrative, rather than plot devices. Give E. Max Frye's script credit too for immediately commencing the proceedings, forgoing the usual 20 minutes of exposition. Like the free-spirited Lulu played by the always ravishing Melanie Griffith (name a better, funnier, sexier 1980's actress), Demme unchains genre filmmaking, concocting something ungainly, but compassionate, and wholly recognizable in its anxieties.

Three temporal arcs define Sergio Leone's epic, nearly four-hour fever dream dedicated to a few kids growing up in the Brooklyn, aging into animalistic gangsters as adults, then being filled with regret and lament as aging men. However - Leone's genius is two-fold, in that he relays the film out of chronological order, skipping back and forth from bits and pieces of each period, eventually assembling a remarkably structured, complex explanation for what makes certain men turn to violence for sustenance. Moreover, Leone integrates deep levels of misogyny, operating almost as if he were oblivious to them - of course, he isn't, and offers several brutal beatings and rapes as a confrontation of the temptation to psychoanalyze its characters, both men and women. One scene troublingly suggests a female bank teller enjoys being raped, while a few others revel in the horror - again, not a complicit fulfillment of perverse male desire for Leone, but an intentional problematizing of reductive readings; the drive towards such monstrosity goes deeper, as does Leone's entire film, compellingly acted by several greats (De Niro, Woods, Pesci) and recounted (both forward and backward) during an opium trip, where time and space - and the totality of life - collapse into one stream-of-consciousness memory. Leone's visual prowess and compelling metaphor more than sustain the lengthy runtime.

Could Alejandro Jodorowsky top The Holy Mountain in terms of unbridled insanity? Apparently so, as Santa Sangre raises the stakes even for the notorious rabble-rouser. If there was the least bit of caution remaining, it has all been cast to the wind, challenging anything and everything, particularly good taste - but Jodorowsky has always been rooted in the satirical, accompanied by his own warped moral sensibilities, and they resonate strongly throughout, particularly in how he assembles his images and mise-en-scene. It's his most thoroughly horrific film (see producer Claudio Argento), even paying homage to James Whale's The Invisible Man - as perverse an homage that comes to mind, given its context within the film. Conjoining surrealism with genre produces an unwieldy, maddening phantasmagoric nightmare, its allegorical dimensions apparent but difficult to fully unearth. Either a madman or a genius (I'll say both), Jodorowsky produces cinema on the brink, spilling over in anarchy, a challenge to passivity and complacency - abjection as art.

The parlor tricks don't add up to much in Out of Sight, one of director Steven Soderbergh's least obnoxious, smarmy films. Wholly consider that damning with faint praise. Soderbergh is one of the most curiously heralded filmmakers of the past 25 years, to my knowledge having failed at this point to make a successful film (this includes Sex, Lies, and Videotape, The Underneath, and The Limey). He's the epitome of indie-chic, using his films as either pseudo-genre revision (The Underneath, The Limey, The Good German) or fashion statements (Bubble, The Girlfriend Experience, Che). Out of Sight rides the coat tails of Get Shorty and Jackie Brown (both are better Leonard adaptations), but Soderbergh drains excitement and passion where he should embellish - even in a genre film, he manages to seep the fun out of it, both by his detached direction and incoherent visual style, ugly and stagnant. The cast is better (especially Don Cheadle and Jennifer Lopez) than their director, who energize the film far more than anything Soderbergh's cold hand can muster.

Is there a more intricately perverse film than Robert Aldrich's Kiss Me Deadly? Certainly not from the 1950's. And, revisiting the film, one's forced to wonder just how what's on-screen came to be. Meaning, Aldrich is decades ahead here, perhaps generating (or at least heavily influencing) the sensibilities of David Lynch, emphasizing the banality of human behavior by way of cultural disconnect, with the entirety of film noir in its rearview mirror, deconstructing genre while reifing sexuality and heavily fetishizing bodily movement, gesture, and proximity. Aldrich suggests the hard-nosed posturings of Mike Hammer as both male chauvinism and identity crisis, the character (and the film) trapped between two realms - the former being tradition (sexist/misogynist), the latter progression (in both social/cinematic terms), and ultimately conculcating both with an apocalypse, in one of the greatest endings in all of film history.

A surprisingly adept and thoughtful little later period noir, Witness to Murder is primarily sustained by two factors: John Alton's remarkable cinematography and a script that convincingly integrates a running commentary on societal double standards between the sexes, as Barbara Stanwyck's single, professional woman is continually belittled and told she's hysterical (implied menopausal) for claiming to have seen a murder from her apartment window. Though knowing from the opening shot that she isn't crazy makes the expositional scenes fairly monotonous (a few exceptionally drawn out), there's a continual address of theme, most of it perceptive, and visually resplendent.

The succession of testimonies and interviews comprising Frederick Wiseman's +3 hour documentary prove an unnerving, thoroughly disturbing, and ultimately devastating experience. The mere duration of such pain and torment among physically, verbally, and mentally abused lower class women, coupled with Wiseman's unobtrusive filmmaking style (there is no explicit thesis or polemical argument being made), forces the viewer to sort through it all, assembling his/her own comprehensive analysis, that the film (wisely) omits. Many of the personalities and stories on display are at times absurdly self-destructive, perhaps even bordering on sickeningly humorous, but the crux of it all lies upon an implicit investigation of inescapable imprisonment, deeply rooted societal and economic forces enabling the continuation of a cycle (continued through subsequent generations) without any simplistic "call this number to help" conclusions or solutions. It is ambivalence personified, grossly frustrated by extreme limits of human pain and suffering, yet without any definitive take or answer - the subjects truly speak for themselves, perhaps more so than in any documentary I've seen. Admittedly, this is the first of Wiseman's films I've seen, but his fearlessness and unwillingness to compromise the integrity of his filmmaking by pacifying the destruction felt among its individuals and families is remarkable, and unquestionably the work of someone with a complex compassion for the human condition.
Posted by Clayton Dillard at 11:50 AM