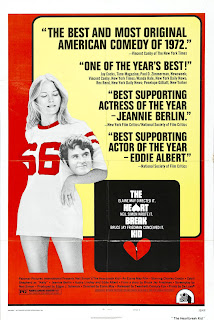 Few films are able to elicit such an ambivalence towards its characters as Elaine May's near-masterpiece of generational failings, as scripted by Paul Simon. Patriarchal traditionalism meets a painfully funny (and potentially lamented) end; May's film cuts even deeper than The Graduate (though it is certainly an influence), because May treats social norms with utter irreverence, coldly constructing Lenny (Charles Grodin) to be even more of a dunce than Hoffman's Benjamin Braddock. He's one of the most unlikable protagonists in film comedy history - but wholly human, functioning on predicated notions of decorum and proper behavior, which come hilariously crashing down around him. None of the three leads are vilified (unlike the 2007 remake) and each make strong cases for equal parts admiration and disgust. One of the sharpest comedies of the 1970's.

This is the girl, alright. David Lynch’s chilling, ironic paean to Hollywood solipsism astounds with its clarity, a thorough condemnation that transcends trite allegory or didacticism by distilling its humanistic pathos well past the emotional boiling point. Devastating in its implications, Freud and Irigaray would be proud – psychological crisis as “women on the market” morality play. Perhaps the epitome of what we refer to as “Lynchian,” with characters acting as surrogates for one another, domestic banality reaching absurd ends, and dream logic dominating, Mulholland Dr. may be the definitive cinematic work of the 21st century, its comprehensive scope extending well beyond the realm of moviemaking – physiognomy as societal imprisonment, “blonde or brunette” as the ultimate sexist binary, literally reducing life to a “whoever’s best for the part” sensibility. Lynch suggests a destruction of essence, where a lack of self-consciousness and knowledge (the fundamental state of existence) leads to involuntary disavowal. Can a human being’s essence become lost? Of course, when a society enables self-hatred, promotes subterfuge, and facilitates sadistic uniformity. Mulholland Dr. may not have superheroes, natural disasters, or Apocalyptic overtones. Yet it is, in the truest sense of the word, epic, detailed as to encompass the totality of human existence, a film that holds all of life’s answers – and yet none of them, expanding just quickly as it dissipates. A living, breathing paradox.

One of the most explicitly existential films in Walter Hill's canon, The Driver radiates a collected coolness, both through its minimalist style and nameless characters, each seeking fulfillment in a world that cannot provide it. Noirish and heavily indebted to Sam Fuller's Pickup on South Street, the films zips by at 91 minutes (edited down from the much longer, 131 minute-cut shown at its Los Angeles premiere) and deftly reveals Hill's crack-shot narrative efficiency, theme and thrills in equal doses.

A death poem if there ever was one, here is one of the most controversial, censored, and banned films in history - mainly because its maker, Yukio Mishima, would eventually really kill himself via ritual suicide, as is depicted in the film. Simple conceptually and even sparser in its stage setting, Patriotism nevertheless profoundly enunciates political and ethnic influence, inextricably embedded - duty superseding self-preservation, made all the more impactful because of its prescience.

The better of the two noirs, if only for great acting turns from Edmond O'Brien and Vincent Price. The script is nice too, especially its first act, which brings a genuine sense of vitality, sadism, and excitement to its core group of slimy characters, embracing its pulpy roots. However, after the "twist" is revealed, everything settles into place, raising few thematic questions worthy of consideration, and remaining on the same visual plane. Sufficient, but hardly superior.