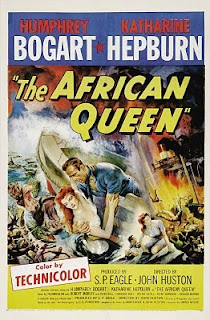 John Huston gets mighty playful in The African Queen, an exciting bit of fun wholly reliant on the personalities of its stars. Not to sell Huston short - he orchestrates it well, instilling elements of screwball comedy in a classic "journey" narrative. Akin in ways to Hitchcock's North by Northwest (emphasis on characters/whimsy rather than medium/theme), there are certainly laughs to be had, enjoyment to engage. However, the film's status as one of the greatest American films ever made rings quite bullish - indicative of an evaluative body more amused by shenanigans than discursive sophistication.

John M. Stahl's incredible melodrama excavates soapy maternal angst, racial tension, and biting class commentary without ever stepping into the unabashedly histrionic - more importantly, every emotional pull at the heartstrings derives from an interest in human well-being and equality. Most remarkable is how sincere and concrete the film is able to address the derivation of racism, not pandering in the slightest, positing double consciousness and prejudice as a tragedy, to be sure, but also an inevitable function when money, commerce (the scene where Louise Beavers first poses for her pancake label is both humorous and haunting), and the human beings associated cannot be extricated from the other.

Joe Wright drastically switches gears for Hanna, a trashy, perversely conceived bit of business, nicely paced, and kinetically directed. The film lacks much discernable content/interests beyond the visceral, achieved through several long takes, crescendos, and a sick score from The Chemical Brothers. Thankfully valuing suggestivity over straight-forward exposition, the enigmatic elements contribute when the action ratchets up - as does a palpable nihilism, for better or worse. A few German baddies explicitly evoke Jean-Jacques Beineix's Diva (especially in the chase sequences) and Wright's sensibilities are somewhere similar - in love with the image to ends both significant and flawed, he has little to communicate as a filmmaker, but he does so with fluidity. And, I'd be remiss if I did not mention Saoirse Ronan, who may be the best thing about the entire film.

Mistaken upon initial release as merely a women's weepie, Douglas Sirk's Imitation of Life deserves the retrospective canonization it's received (much like Paul Verhoeven's Showgirls, a thematically similar film, is on its way to receiving). Ditching the "pancake queen" narrative of Stahl's endearing original for a more provocative exploration of both female and racial identity crisis, Sirk posits Hollywood dreams as directly correlative with rampant sexism and ageism, forcing women to give up their humanity (and dignity) for a chance at success and, even more impressively for Sirk, deconstructing the lurid ways in which physical appearance, specifically skin color, causes intense psychological damage in a culture irrationally obsessed with posturing, surface appearances, preferring a facade over sincerity. Sirk lines his melodramatic ducks in a row, but transcends emotional pornography by rooting the cruelty in a tangible sense of the absurd (the use of a "double" which manifests in two separate sequences is particularly striking) and lucidly, heartbreakingly, revealing how such madness could be averted - were the irreducible culprits (historical physiognomy, ancestral shame) not so firmly in place.

Would it be nonsensical to call Trash Humpers "conventional" Harmony Korine? Here is a film that strips any pretensions from its narrative, honing in on kinky, fetishized behavior, and asking...well, something, though the film's intentions never manifest in any ways other than wholly absurd. To even begin an argument for Korine's film as poetic, socially conscious, or meditative on the disconnect of human/culture relationships is tempting - though wholly inappropriate, since Korine is up to the same old tricks, indefensible (and ready-made-defenses) all rolled into one, passing as radical, audacious, filmmaking. At the end of the day, it is just people, in masks, fucking trash. Take it or leave it.