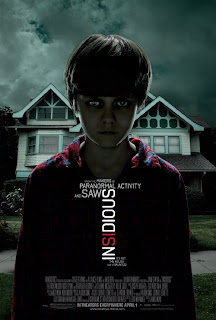 Now this is what I'm talking about. Horror rooted in both character revelation and return of the repressed confrontations, James Wan concocts a fitting homage to his beloved Universal Horror Classics, while also traversing ground that encompasses but surpasses the scare tactics of the Paranormal Activity films. Here's a haunted house flick that genuinely ratchets up the tension in several late sequences, besting Sam Raimi's Drag Me to Hell in terms of both humor and sophistication. Unfortunately, Wan relies upon far too many blaring string crescendos and jump scares to truly assume rank as one of the greats (The Innocents remains the greatest film of this sub-genre), plus he really doesn't excavate much of a discernable subtext at all, but that doesn't negate the game effort, a welcome bit of horror ingenuity amidst the genre's now banal tidal wave.

Definitely old school in its approach to suspense, Duncan Jones' sophomore feature deftly navigates a simplistic premise, coherent enough to allow for character growth, nicely played by key actors Jake Gyllenhaal and Michelle Monaghan. The beats of revelation are those of a calculated script, forced and mechanical, especially the risible motivations of the terrorist. Buzz phrases like "war on terror" come and go without warrant - and the ending seems to miss the bittersweet irony an alternate would have provided. Clearly, issues abound, but the core of compassion through understanding so nicely comes together, that exterior issues become less problematic.

Peter Weir's ultra-aestheticized masterpiece delivers a knockout punch as a work of art - meditative, critical, stripped of dramatics. The film's meta-aspects, while impressively implicit, are not necessarily the point of the piece, thus allowing the images to speak for themselves. The inherent examination of the fetishization of the innocent female body - physical totality as the ethos of a society that cannot recognize existential or spiritual awareness (despite belonging to rigid religious denominations), is made clear by a doctor who keeps referring to the girls as "intact." As reverie, Weir could not be less intact, denying wholly rational or empirical modes of thought as restrictive and damaging to the human soul. Moreover, any explicit meaning is omitted, thus the art achieves a transcendental state through affect, ironically eroticized. It's a staggering viewing experience.

The Passenger finds Antonioni at the breaking point - a visually taut film wholly detached, making even the always charismatic Jack Nicholson seem dull, without feeling. What to make of it? Comparable to late period Godard, there are numerous cinematic proficiencies, but without any tangible or compelling reason to engage. A thorough example of self-indulgence, it seems better in hindsight, without the long stretches of nothingness. Unlike Blow-Up (perhaps his greatest achievement), Antonioni neglects human evolution (ethically, morally, or spiritually), thus dissolving a core upon which his visuals can hang from. A few great dialogue exchanges don't compensate for that lacking, so while there's certainly much to contemplate, nothing truly profound manifests.

Scream 4 Review
Posted by Clayton Dillard at 10:07 AM