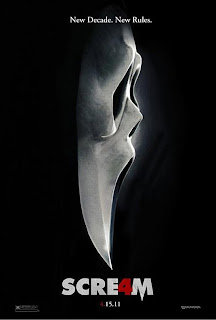 Anyone who posits Michael Powell's Peeping Tom as the genesis for the slasher ethos deserves mad props. Coming via the fourth installment of a self-reflexive, perversely entertaining slasher franchise - that's almost some kind of miracle. And yet, why should one expect anything less from Scream 4, especially based on the pedigree of director Wes Craven and screenwriter Kevin Williamson? Beginning with the 1996 classic (and traces wholly evident in Craven's 1993 New Nightmare), the writer/director duo shattered pop mania with a crackerjack explanation for cultural hysteria, transcending simply the "meta" by revealing the unconscious death drive of a generation weaned on MTV and ironic detachment. The manifestation of Scream was wholly organic, not calculated or merely indicative of a postmodern sensibility, but thoroughly reflective upon falsified notions of love, death, and emptiness that pervaded theater screens and television sets. Scream got at something deeper than art: its inescapable control over the human beings who both consume and produce it.

Thus, the release of Scream 4, more than a decade after the admittedly tepid third installment, provides the sort of cultural event needed in such bleak filmgoing days, pervaded by a dearth of artistic inspiration. Aside from Terrence Malick's forthcoming The Tree of Life, it is the film event of the year, a glorious moment for those who still care about the things that shape cultural innovation and practice. Scream 4, even considering all of its shortcomings (which are numerous), makes viewers look themselves in the mirror, much as the film engages its own navel-gazing. It invites introspection. Identity, taste, morality - it's all on the table, even if many oblivious critics would have you believe otherwise. To not drop everything and meet at Williamson/Craven's altar for a couple of hours on opening night is akin to cinephilic homicide.

And yet early box office receipts indicate many did not, a fitting result for a consistently misunderstood director. Beneath the surface of Scream 4's jokey dialectic lies an ambivalent bitterness. Nothing explicates this better than a kill late into the film, as a victim lies upon the interior of her front door, only to be stabbed in the back, through the now anachronistic mail slot, a relic of cordiality and domesticity erased by the intrusion of e-mail, texting, and electronic subterfuge. That which brings us closer draws us further apart - a literal stab in the back to decency. Moreover, as the film's tagline asserts and is stated in the film: "New Decade, New Rules." Yet, this should not be taken as a thoughtless maxim, but an ironic moral question: Do the changing times excuse/explain historical disregard? Imitation (or, more precisely, replication) as murder begins the film, yet the remake craze also cannibalizes and distorts socially conscious investment for profit. "Don't fuck with the original," as Sidney tells a killer. But Scream 4 is doing just that: fucking things up, but surely just as fucked as the milieu from which it springs.

If Craven's film is riddled with inconsistencies in tone, is that not on us as consumers/viewers? Ghostface states in the opening scene, "This isn't a comedy, it's a horror film." Are they any different? Narcissism and self-reflexivity as a prank, a gag to reflect such a lacking in modern thought, where awareness of the self effaces another - yet paradoxically cancels out the self, interdependent among the others for coexistence. Thus, when unceasing video blogger Robbie (Erik Knudsen) puts his headset on backwards, it reveals something he has never seen: the past, a perspective other than his own. Necessarily, this error ends with his death. Previously, his Cinema Club ritualizes the glorification of commodity, lining up the seven Stab films as a recurring, annual celebration. The viewing crowd recites the lines, relishing the knowledge of what lies ahead, yet delighting in feigned surprise when it actually happens. The phrase of choice throughout the franchise has been, "don't you know that history repeats itself?" Craven recognizes less a predetermined repetition than one of human error, where cultural obsession and personal preference dominate to the point of a comprehensive deterioration. Is Scream 4 too much? Of course it is - grossly so, it defies rationality with its intrinsic absurdity. Nevertheless, it is a necessary film, a much needed reminder of how stupid life becomes when culturally fueled instant gratification devours a calmer intuition.
Posted by Clayton Dillard at 11:48 PM