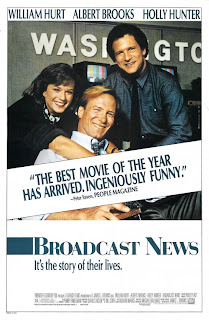 Got to call bullshit on this one Criterion. James L. Brooks's syrupy-precious dialogue and characters are enough to make one sick, particularly when such middlebrow "punchlines" are meant to be jousting blows upon news reporting; such "satire" is more liberal-baiting shenanigans than gritty truisms, especially when it's overshadowed by a hokey love triangle featuring three "just so" characters, all of whom have been written to the point of manufactured spontaneity, as when Holly Hunter's newswoman has a brief cry to get through her day, or Albert Brooks's shy-smart character finishes a long monologue with "I love you...see, I buried the lead." Oh so precious, and oh so unconvincing, especially at the film's maddeningly long 133 minute run-time. Hubris of the writer/director masquerading as battle of the sexes shtick.

The batshit-ness of Shinya Tsukamoto's doppleganger allegory for class struggle is its biggest strength, since the bulk of the film is entirely unconvincing and preposterous as a narrative to be taken seriously. Likewise, the insinuation of apocalyptic undertones plays as merely an insincere gesture of arousing cynical excitement. Tsukamoto can conjure up a wild, partially developed concept, but his execution and ability to sustain even an 80 minute film leaves a bit to be desired.

[REWATCH] Billy Wilder's Ace in the Hole, a scathing news-as-carnival critique, does not hit quite as hard as many would have you believe, particularly because Wilder's pursuit of expressing misanthropy has not found a wholly suitable vehicle in the form of a "man trapped in a cave" narrative. Kirk Douglas's scheming news reporter is surrounded by even shadier characters (some consciously solipsistic), others driven by morbid curiosity (such as a family who sets up camp outside the mountain). The tendency to be impressed by Wilder's darker impulses should not compensate for the film's overall shallowness, in its rather simple arc of a man going from arrogant hot-shot to sorrowful heel, often expressed too explicitly or "on the nose" through manufactured irony. Impactful, to be sure, and a good film, but lacking the moral messiness and ambiguity to be a great one.

Few films play as dated as this one, severely hindered by Hitchcock's insistence upon explaining every single bit of psycho-babble or "guilt complex" motivations, ad nauseum. Even more so, the film's central love story (this is also, by far, one of his most explicitly melodramatic films) plays mightily unconvincing in relation to the more seriously constructed psychological end. However, the famous dream sequence, created by Salvador Dali, is rather magnificent, and, as strictly a set-piece, quite profound. However, within the film, much like the rest of the narrative, it's creaky and disjointed, certainly the director trying out various elements that he would later utilize for maximum efficiency.