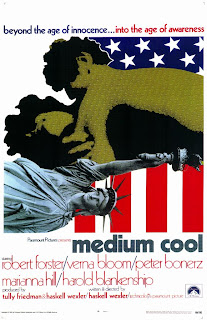 Haskell Wexler's fascinating passion piece, climaxing with a riot at the 1968 Democratic Convention in Chicago, refrains from engaging its modern political climate with only enraged polemics; there's some of that there, certainly, but structuring the film around a conflicted news reporter (played with reserved intensity by Robert Forster) prevents the film's overstated rhetoric from becoming arrogant or didactic. Also helping is a wonderful narrative involving a young boy and his single mother, juxtaposing pastoral tradition with fervor and change, producing a genuine piece of Americana, wholly indicative of its time period, yet wholly relevant in its consideration of media hype and the control of truth and information. This screening was followed by a Q&A with Wexler, who stated the film's circumstances riveted him as much today as when he made the film 42 years ago.

Perhaps the most complex narrative film ever made about art, Michelangelo Antonioni's Blow-Up seethes with complexity, both in narrative and philosophical terms. Achieving revelation primarily through visuals, Antonioni traces the hollow aesthetic practices of a young photographer (the wonderful David Hemmings), who believes he may have captured a murder on film. Initially controlling, bored, and superficial (teaching Vanessa Redgrave the "sexy" way to smoke a cigarette), the character's transient interests (engulfed in an even more emotionless world of consumerist zombies) momentarily approach human compassion, feeling, and worth - only to have them both literally and metaphorically erased by the refusal of others to acknowledge any such deficiency. Without anyone to share his knowledge (and, by extension, his art), it may as well be a fabrication, non-existent, as the final image intimates. For cinephiles, few films rival Antonioni's devastating allegory for the necessity of engaging politics and humanity, rather than negating them.

Watching Jerzy Skolimowski's bravura Deep End, one is forced to confront youthful sexual desire - enacted in both intelligent and hysterical ways - as a complex psychological entanglement, informed by empiricism and irrationality simultaneously, resulting in an obsession that is far too polyvalent to easily pin down. Herein lies Skolimowski's brilliance, that he can make the proceedings funny, heartbreaking, and disturbing, because he keys into human dilemma, the desire of fulfillment as self-effacement, as seen through the eyes of a 15-year-old boy. Try and track down this overlooked classic.

In terms of a slow burn devastater, few films (narrative or non) can rival Martin Bell's Streetwise, a poetic-realist documentary about young teenagers hustling, panhandling, and prostituting on the street of 1983 Seattle. One would be a fool to accuse Bell of exploitation, since his presentation of the material is consistently infused with compassion and human care, at one moment embracing the teens' day-to-day routines with humor, the next focusing on lost innocence, medical issues, and the overwhelming sense that these kids have not (and never will) receive a proper chance. Documentary filmmaking doesn't get much more powerful than this.

Louis Malle's dedication to probing varying cultural mores finds well-suited allegory in Pretty Baby, taking place in the Storyville section of New Orleans in 1917, right towards the waning days of legal prostitution. Shocking audiences in 1978 was the nudity of child star Brooke Shields, mistaken by many viewers as exploitation and merely debased - but of course the images are, but the film displays a moral lacking once human beings are allowed to, literally, be auctioned off - nubile flesh as commerce and sexual fantasy. Underlying any such criticisms is the film's moral foundation, subtle, and performed with quietude. Lacking histrionics or didacticism, the film was bound to be misunderstood and misread.