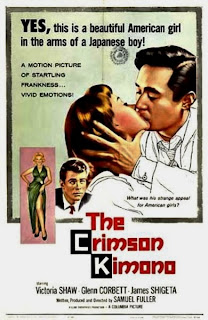 Sam Fuller's racially driven The Crimson Kimono comes late in the classic noir cycle (arguably after it, depending on whose time line you're using), but it adheres to the director's chosen dialectical form more than the tenants of what one thinks of with noir - social issues given a convincing narrative rather than simply an enraged polemic. As Curtis Hanson puts it in his interview on the DVD: "Sam Fuller hated racists." We've come to expect nothing less obvious from that curiously heralded director, but I digress. Fuller's vision is a human one, concerned with probing cultural tension (both between and from within), rather than postmodern questions of genre. His mode is preferable, and when he gives characters such solid dialogue and vitality, it's hard to think of a director who does it better.

Nothing stinks worse than rotten satire. Supplying his usual levels of pomposity and self-righteousness, writer/director Christopher Guest takes aim at Hollywood, attempting to reveal the shallow, consumerist core that drives all productions. However, Guest fails to acknowledge that his own narrative, concerning a young up-and-coming director (Kevin Bacon), equally fulfills a high degree of banality and indulgence, mechanically moving the character from being naive and optimistic, to a hot shot who betrays his friends, to, finally, a reunited figure who holds strong to his principles. Lots of cameos abound, but that doesn't lessen this leaden film's thunderous thud nearly enough.

Walter Hill's apocalyptic re-envisioning of both history and genre is a virtuoso testament to his bravura filmmaking. As I was mentioning to someone the other day, he should be the first and only choice to direct "The Expendables 2." He would instill a control and mastery that Stallone's haphazardness could not. Nevertheless, Last Man Standing approaches greatness throughout, suggesting a "history of violence" as intrinsic and vital (sexy, even?) to darkly ironic American values. Hellish? Limbo? Yes - he broached the subject before Lars Von Trier or David Cronenberg, but because it is a genre film, went generally unnoticed and unappreciated. Not quite Kurosawa, Leone, or Peckinpah, Hill still supplies a strong discourse on mythmaking, narrativizing of history, and genre form. It's, so to speak, a blast of a film.

Nic Roeg, we bow before you. Positing sexual obsession and love sickness as correlative for dissolving its characters' sanity, the film mirrors this through a remarkable stucture and shot composition, physical pain manifested as psychological (temporal) inconsistency. Yet, there's nothing "eccentric" or "odd" about Roeg's forthrightness, displaying a part of his soul, his anxieties and fears. It's the sort of personal filmmaking that has nary a manufactured, calculated moment, heightened even moreso by an unforgettable Theresa Russell performance. Harvey Keitel is fantastic too (as always), but Roeg remains the star - here is a real relationship, laid bare, totally without reservation and unafraid to get messy.

[REWATCH] Claire Denis explores her unique aesthetic proficiency (beauty, really) and the transformability of militarism (brilliantly allegorized as dance, physicality) in Beau Travail, certainly one of the most lyrical films of the past decade, and something approaching the transcendental state identified by Paul Scharder, a film that, while loosely adapted from Melville's Billy Budd, cannot be quantified without reductive practices. There's an elegance, a sexualized mundanity to her sensibilities, which proves thoroughly compelling in a film with less than a dozen lines of dialogue. Few films approach her level of artistry.

Kill the Irishman is an hilariously conventional mafioso tale (based on a true story, natch), filled with the requisite ethnic slur humor, shootings, double crossings, car explosions, and posturing male leads. It's not a total loss - there are a couple bright spots, as when Vincent D'Onofrio stabs a random guy to death in the back of his trunk or Christopher Walken, whose line readings and mere presence elevate the painfully rote presentation to somewhere at least palatable. But no, it's a joke on the whole, hitting every cliche imaginable.

Abbas Kiarostami's enigmatic meditation on identity, love, art, sexuality, sensuality, and a fractured relationship is a masterpiece - or it could be if it were actually about these things; rather, the widely heralded director, whose visual style remains undistinguished and pedestrian (save a layered long take from the outside of a moving car), has concocted a narrative that many are reading as polyvalent and multifaceted - nah, not so, because Kiarostami can't be bothered to venture away from his ceasing obsession with, as the title indicates, artifice. Moreover, his intentionally meandering narrative borrows liberally from Last Year at Marienbad, My Dinner with Andre, and Before Sunset - and aside from a quickly exhausting and obvious meta-textual device, the director never gives any convincing reason to indulge his indulgence. Kiarostami cannot take the form and infuse it with the content, a necessary footing needed in order to appreciate any perceptions about human beings he might have to bestow - here is indeed a fake (a hah a hah), a defensive work seemingly meant to address his critics and stroke his followers. Smugness is not a good quality.

One of the most convincing genre films (in the truest sense of the term) of the last decade, Walter Hill's critique of the societal eroticization of athletes (specifically black ones), a practice which morphs into the spectator's contempt once said individuals let their fame spiral out of control, manifests in the form of a real narrative - not a self-congratulatory meta-text. Prison systems run by all-white employees (like the predominant fanbase of most athletes and rappers) use the inmates as commodities, a means to achieve their own ends, which necessarily leads to human degradation. However, don't mistake this point as in any way didactic - such themes remain implicit, molding around two great leads (Wesley Snipes and Ving Rhames), with a fascinating supporting turn from Peter Falk. The primary concern is suspense, character, but Hill's underlying interests create something significantly more profound than a mere boxing film.

[REWATCH] The Enigma of Kasper Hauser is one of Herzog's most lyrical films, expressing the absurdity of modernity in ways both subliminal and understated; his evaluation of a tabula rasa individual, corrupted by a society who had the chance to truly start anew and not churn out yet another clone of rigid rational thought, while humorous, is devastatingly tragic, especially through the classical modes of rural beauty which Herzog works - using many traditional musical pieces to juxtapose the ways in which societal discourse excludes any opposing modes of thought. Cold, but still fervid, the allegorical dimensions are endlessly fascinating.
Posted by Clayton Dillard at 1:51 AM