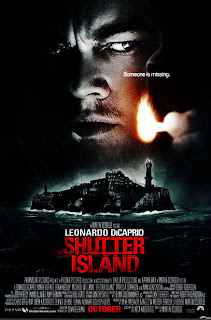 Following his overrated cop epic The Departed with Shutter Island makes sense for Martin Scorsese. Working (and muffing) a gangster genre piece, his new film, based on the bone-chilling novel by Dennis Lehane, hybridizes horror and film noir, allowing one of cinema’s greatest masters to make a distinctive new entry into his 40+ year filmography, while integrating various, seamless homages. Shutter Island lets Scorsese be at both work and play, simultaneously.

Boston, 1954. U.S. Marshall Teddy Daniels (Leonardo DiCaprio) arrives via ferry with his partner (Mark Ruffalo) to a secluded mental asylum. The objective: find escapee Rachel Solando, one of the institution’s most dangerous patients. No one seems to know how she’s escaped. Dr. Cawley (Ben Kingsley) explains: “It’s as if she evaporated, straight through the walls.” Encountering potentially supernatural beings and confronting his own demons, Daniels’ sanity becomes the crux of the film’s focus.

In taking on a project set in the mid-1950’s, Scorsese affords himself the opportunity to rack his movie knowledge. The string and horn score is indicative of nearly any of Bernard Hermann’s greatest, most notably Psycho. Flashback scenes, set during World War II, clearly recall Sam Fuller’s great The Steel Helmet. Visual motifs signal reverence; a spiral staircase derives from Powell and Pressburger’s The Red Shoes, one of Scorsese’s favorites. Even Kubrick’s The Shining gets a fabulous homage, especially in one of the film’s key scenes.

Thankfully, Scorsese does not let the references run amok. They are not impertinent to the story at hand, and certainly play runner-up to the gripping narrative, held tightly together by DiCaprio, in one of his good performances. He’s especially convincing here, featured in every scene, but maintaining a modesty that doesn’t make his presence tiring.

Shutter Island is a decidedly artistic effort, nowhere near the commercial vanilla that hurt the entertaining, but underwhelming The Departed. You’d have to go back eleven years and cite Bringing Out the Dead to find a truly comparable example from the director’s past films. There is rough material here, presented in a fairly abstract manner, especially in several flashbacks, the best sequences of whole piece. Familiarity with surrealism and expressionism will be required to understand precisely what Scorsese is getting at. The trailers depict fairly conventional horror tropes, but the actual film exorcizes much darker demons and it’s certain that many moviegoers may be turned off by this.

However, once the menacing music, DiCaprio’s vulnerable, but stern performance and the organic aura of despair set in, your blood runs cold. Regardless of being a bit flabby (at least two or three scenes could have been trimmed off) and having an over-explanatory ending, the grasp of Scorsese’s directorial hand grips squarely around the throat. He builds atmosphere, even at 67, like very few filmmakers are able to. Is it anywhere near as good as Mean Streets, Taxi Driver or After Hours? Of course not. However, it’s one of his strongest from the past 20 years and impressively demonstrates that he is still capable of churning out top notch work.
Posted by Clayton Dillard at 12:58 PM