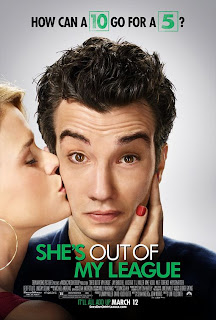 Arriving post-Farrelly Brothers, post-Apatow, the new (by release date only) comedy She’s Out of My League attempts to combine moments of bodily fluid, crotch shot and man-grooming humor with a much sweeter side, showing that beneath the veneer of filth and cynicism its twenty-something characters blithely spew, lies more seasoned and mature adults, just coming to grips with their loss of adolescence. Problem is, nothing about either its characters or what they are saying constitutes anything that can’t be gleaned from countless other, better films. Or, for that matter, any college dorm across America. The discourse would inevitably be more astute.

Movies like this, not wanting to put forth any effort, depend on introducing character types, more easily establishing the fictitious (but real) world inhabited. Kirk (Jay Baruchel) has worked airport security with his buddies since he graduated from high school. His girlfriend recently dumped him, his friends and family make fun of him, he’s down on himself, etc.

What does a slightly awkward, down-on-his-luck guy need to turn his life around? According to She’s Out of My League, a hot (but nice, sweet) babe. Insert Molly (Alice Eve), the kind of woman that makes every man’s head turn. We know this because her intro is a slow-motion sequence, dance club music blasting, while each and every male (young, old, whatever) turns his head in confounded astonishment, relishing her beauty. Mouths fall agape, husbands get jabs in the sides from their wives – basically, the world stands still. Meeting her after a mix-up with her iPhone (so chic), Kirk’s living out the fantasy his friends say is impossible: He’s but a measly five, dating a ten.

A fundamental problem at the icky heart of She’s Out of My League is the utterly cut-and-paste viewpoint it takes on relationship mores and practices. Kirk’s friends talk like the scheming screenwriters who concocted them: all pizzazz, no veracity. Their dialogue works only as a type of vogue, blanketing the utter lack of connection with real world relationships.

Likewise, Molly and her pal Patty (Krysten Ritter) are allocated only enough screen time to keep the balance of power from completely toppling into the males favor. Why not a film from Molly’s point of view? Or, for that matter, how about a comedy where the woman is the five and the man is the ten? Unfortunately, Hollywood has a problem when it comes to such role reversals, so we’re stuck with yet another comedy pandering to its crowd, offering the underachieving male’s perspective.

Only, it isn’t any sort of discernibly honest perspective (how could it be when peddling easy gags about getting hit in the crotch with a hockey puck, a dog licking Kirk’s boxers after premature ejaculation or Kirk shaving his “man region,” a joke that was old when American Wedding did it back in 2003?). Nope, nothing too gut-bustingly funny about these old jokes and character types, thinly veiled and re-wrapped to try and squeeze every last ounce of comedy out of the already barren barrel.
Posted by Clayton Dillard at 12:54 PM