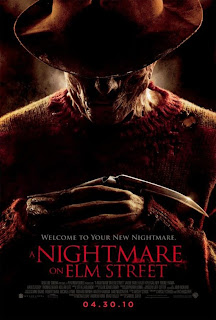 Samuel Bayer’s soporific “re-imagining” of A Nightmare on Elm Street ultimately amounts to this: several blobs of talking skin, bone, and flesh (I guess these are supposed to be human beings) tell each other about their difficulties sleeping. They’re scared for one another. We see it in the blank stares. Monotone line readings help too. “Don’t fall asleep” is the general theme. If you didn’t catch it during its first 50 utterances, it’s stated once more for good measure. Well wouldn’t you know it, somebody falls asleep, but they wake up, barely avoiding Freddy’s grasp. “Take some pills,” one character says. “They’ll keep you awake.” Too late. Already asleep. Then Freddy slits, stabs, scrapes, punctures, and kills, bloodying his rusty but trusty glove-knives-hand thing. Rinse and repeat.

So passes the glory of Wes Craven’s shockingly inventive 1984 original, which placed a group of handsome, sexy, but modest teenagers in some semblance of an actual American suburb, only to have their middle-class comfort wrecked by Fred Krueger, the return-of-the-repressed personified. In Bayer’s film, beautiful people in their mid-20’s replace that original “average” looking foursome, displacing any sense of vulnerable teens. The star of Craven’s original, Heather Langenkamp, was just 19 during production. Her role in the update is player by a dreadfully dull Rooney Mara, 24 during the shoot. The change makes a significant difference, especially since these characters are supposed to be a clan of high school seniors, but beauty seems to trump logic nowadays.

To exacerbate already dire circumstances, the script (or lack thereof) by Wesley Strick and Eric Heisserer contains nary an interesting sequence, scene, line, or moment. They aren’t interested in placing any effort whatsoever into meaningful character development, which would necessitate a conversation, at some point, not about trying to stay awake. If these teens had lives before Freddy, one wouldn’t know it from the film. So what’s at stake? Aside from blindly caring for a fellow (wo)man, they’re but ciphers, detached from any perceivable ethos.

Craven’s original keyed into middle class anxieties via the teens, who suffer the brunt of their parents actions. There is a true sense of shattered naïveté there, that violent actions, no matter how seemingly forgotten, linger in the unconscious of the transgressor, one day returning to haunt them. Freddy was a metaphor; a visually startling one, to be sure, but not the one-liner king a slew of dopey sequels turned him into.

At least the regrettable sequels opted for camp over solemnity. Played with an inept level of seriousness, this one’s too interested in being “a real film”, at least according to the perverted sensibilities passing as profound amongst the bulk of the MTV generation from whence Bayer comes. For instance, Freddy popped up in the original, scary for sure, but always within the film’s bounds. After killing one his victims in the new film, he gaily says: “You know, the brain still functions for up to seven minutes once the heart stops beating. We still have time to play.” In order to have a character speak such a depraved concept, a film’s got to earn it. There’s got to be something it’s getting at beneath the surface or using as irony. No irony here. The only thing on this film’s short-term mind is bad setup, kill. Bad setup, kill, seemingly ad infinitum. The fact that Jackie Earle Haley makes a passable substitute for Robert Englund is beside the point, especially once it’s clear the film has such flaccid, literal minded interests.
Posted by Clayton Dillard at 12:42 PM