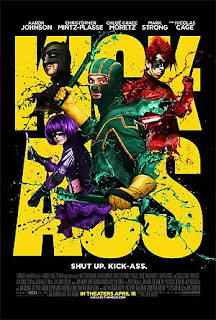 After seeing Kick-Ass, it’s clear that director Matthew Vaughn is either the most droll satirist of our pop-culture times, or a façade of a satirist, intending to subvert and critique what have become comic book norms, but not having the cajones to carry out his mission. Claiming the former would be giving Vaughn far too much credit; it would assert seeming indulgence as poker-faced critique, an argument based solely on desire for such a result. Instead, what’s served up is less than half-baked, an incongruity of intentions, tones and misnomers. Satire, by nature, lambasts and critiques. Kick-Ass is unadulterated indulgence, carried forth with blithe disregard for its implications.

First off, let’s set the record straight: I have no inherent qualms with using an eleven year-old girl as an assassin, dismembering, maiming, and killing dozens of men. However, only when such a character has been put to proper use does it become excusable. Hit-Girl’s role in the film sort of epitomizes what’s wrong with it. Ideally, the character would be used to critique the violence she’s engaged in. Instead, Vaughn merely uses her character for titillation, mindlessly backing a climactic fight sequence with Joan Jett’s “Bad Reputation.” Even the musical choice makes little sense as context. Rather than serving up irony as a means for off-setting extreme violence, Vaughn plays it up, hoping his viewer engages rather than detaches.

It’s a conspicuous lack of consistency for a film that earlier draws a parallel between superhero and serial killer. Lamenting his inaction, titular Kick-Ass deduces: “But like any serial killer, eventually fantasizing just doesn’t cut it any more.” It’s a pretty convoluted comparison, not the least bit subtle, but at least it’s an attempt at pop culture commentary, if a maladroit one.

Clearly, KA’s sensation on the internet as a knee-jerk fascination is meant as a comment on fickle moral sympathizing. Here’s a guy, a normal guy, who fights crime. Yet Vaughn fails to truly serve up any cohesive comment on how new age media enables the partaking of debased content. For instance: when KA’s friends watch as he and Big-Daddy are tortured and beaten, one of them gets a kiss from a previously platonic friend. Instead of being appalled or enraptured by the live broadcast of violence, their libidos still function. Now the time is ripe for a comment on sex and violence, how the two become intertwined when Faces of Death and hardcore porn are but a click apart. Vaughn, seemingly afraid to get his hands dirty, merely leaves it at that. Now, an argument could be made that as viewers, we’re supposed to revile at their actions, even though the film would have us believe they are meant as our identifiers. Certainly, several of the members in my audience identified, laughing at the character’s misplaced concerns. Anyone privy to such efforts, though, would be remiss to claim Vaughn acting as anything other than facilitator. Vaughn’s not a detractor of such practices. Apparently, he’s a fan.

Only a culture so pervasively disconnected from the real world atrocities committed against children could produce Kick-Ass as a piece of pop entertainment. How about the introductory scene of HG and BD, as their superhero belts conveniently abbreviate? Acclimating his young daughter to the unfortunate nuisance of getting shot in the chest while in the line of fire, the scene plays as a yuck, meant to inspire cackling rather than sobering realism. It immediately recalls the scene in Mateo Garrone’s Gomorrah, where young’uns are forced to take one in the chest to prove loyalty to the mob. In contrast, KA becomes a sick joke, or at least an ill-conceived one. Although, I might argue that Garrone’s film also used such imagery as an exploitation tool itself, but at least it’s driving for a significance that’s not even on KA’s radar. Every sequence of violence is meant to be relished, enjoyed, or engaged with. This isn’t inherently bad, but it seems sorely misplaced for a film that wants to reject comic-book lore. As a gutless exercise that merely adds to the laundry list of post-modern misfires, the content feels right at home.

Were this true satire, the characters, especially KA and his “have-to-be-cynical” friends would all be the problem. They would all meet gruesome fates rather than placid endings. Also, it would seek to reverse frat-boy notions of masculinity by eliminating a sub-plot about homophobia that’s played for laughs. It would turn KA’s girlfriend Katie into more than a superficial bitch. Ironically, the most subversive character is clearly Hit-Girl, but Vaughn can’t even muster enough guile to play with feminist notions of female agency. Nothing about his filmmaking indicates he’s approaching her character any different than he would treat an adult female, say Uma Thurman’s The Bride; a school-girl outfit for HG is shamelessly ripped from Kill Bill, and Tarantino undoubtedly ripped it from someone else prior. This is all third-rate kiddie shit, meandering and searching for a purpose, other than appeasing filmgoers who couldn’t accept anything truly subversive.
Posted by Clayton Dillard at 12:34 PM