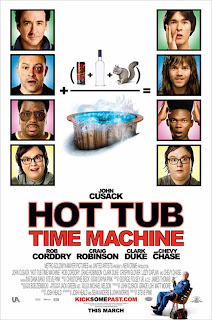 About half way through Hot Tub Time Machine, a new comedy from director Steve Pink, it becomes quite clear that nothing’s ever going to take any congealed shape. Content to let its characters bounce back and forth from lame sight gag to mildly amusing repartee, the script witlessly hurls its four burnt out protagonists into a high concept plot, without much intention of ever building any sincere rooting interest.

After Lou (Rob Corddry) tries to kill himself following a drinking binge, his former best friends Adam (John Cusack) and Jacob (Craig Robinson) decide he needs a bit of nostalgia; a trip to the ski lodge which officially marked the best times of their lives over 25 years ago. Tagging along is Adam’s nephew Jacob (Clark Duke), a chubby, smart-ass type, whose presence becomes wearying quickly. Perhaps not quite as quickly as Corddry’s pervasively foul-mouthed party monster, a character (a performance) unaware of anything approaching subtlety. Once there, boredom turns to euphoria when they discover a glowing hot tub, which, after a night of excessive drinking and nude male bonding (“Have you guys even seen Wild Hogs?”) they wake up miraculously, astonishingly 25 years in the past, at the very point in time their lives took a crucial turn for the worse.

It’s always fascinating in such high concept comedies when the film has so little wonder about the process that has landed its mishap characters in an incredibly uncanny position. Add this one to the list. In fact, the lack of interest in either the premise itself or the mounting of comedic momentum makes it all the more disappointing. Trying to cram far too much into its 100 minute runtime, the film would have been wise to cut a few characters (namely Jacob, a needless inclusion) and really immerse itself in examining the regret and pathos felt by its three main characters. That, and eliminating jokes about digging car keys out of a dog’s ass, a urine spewing catheter, and several overtly homophobic gags.

The only bright spot comes in a small role from Crispin Glover as a long time employee of the ski lodge. I won’t spoil the running gag; it at least gets to the more bizarre, yet dopily inspired type of humor which sadly is in short supply here. Cusack gives it a run, charming and as convincing as any actor could be in such a role. Robinson also has charm, but he’s given far too little to do, usually the recipient of one of several over-the-top and in poor taste gags involving Corddry. Ultimately, without any sense of comedic timing in editing or plot construction, the actors struggle to wrestle laughs, or even mild amusement from the chaotic proceedings.
Posted by Clayton Dillard at 12:50 PM