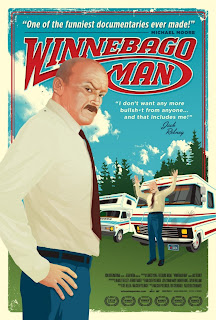 Winnebago Man is hampered by its director Ben Steinbauer, who only glibly considers the larger foundation of his documentary - that being a culture founded upon ridicule, ironic detachment, and subterfuge, or just plain old schadenfreude as the internet and Youtube age came into full swing. Perhaps that's because Steinbauer acknowledges himself as complicit in the hooliganism, admitting that the underground videos of Winnebago salesman Jack Rebney (also affectionately know as "the angriest man in the world") cursing, swearing and unleashing his frustrations during commercial shoot outtakes give him comfort when he's feeling down, knowing that "his frustrations are shared by others." Fair enough, but that's about as deep as Steinbauer is able to plumb the phenomenon, not just of Rebney, but of viral videos in general - their appeal, fascination, and persistence. His curiosity about Rebney, in particular, inspires him to seek out the man himself, whom no one appears to have heard from in years. Steinbauer's interviews with the knuckleheads who use these kinds of videos for a living are the most revealing, as one guy admits "it's funny if I don't know who these people are. Once they become real people, it ceases to be funny." Willful ignorance, then, fuels the fire of pleasure at pain - the subject must be seen as momentarily non-human in order for the sensation to occur and, on the whole, it's that suspension of knowledge that enables the laughs. Nevertheless, Steinbauer is less interested in these ethical or behavioral questions than Rebney himself, who, turns out, lives secluded in the mountains of northern California. He's scornful, hates what's become of him through the videos, and resents those who've made them popular. That is, until he's invited to a screening of viral videos entitled "The Found Footage Festival" (hosted by The Red Vic Theater in San Francisco, no less), and he discovers that people aren't laughing at him, they're laughing with. Or, at least, that's the narrative arc Steinbauer's film tries to present and while there's admitted poignancy in these closing scenes, as an old man realizes his perception of human ignorance doesn't play as down the line when confronted with actual human beings, it is somewhat forced and shallow, especially in Steinbauer's attempts to "sum-up" his film during a closing monologue. There are interesting premises (especially the display of Rebney's outbursts permeating mainstream Hollywood films and TV shows), but the lack of interest in what drives the relatively new phenomenon cannot be overlooked and needed to be more fully delved into and fleshed out in order to make the film a simultaneous character study and societal expose. It is only moderately successful at the former and almost totally neglects the latter.

Posted by Clayton Dillard at 11:04 AM