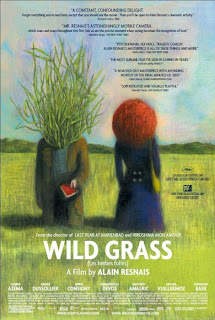 Wild Grass marks one of the most formally ambitious films of the year - not surprising coming from cinematic great Alain Resnais who, at 88 years of age, directs with more awareness, sense of style fitting content, and, most importantly, genuine passion than nearly any solidified director in his 40's. He and fellow veteran Marco Bellocchio (whose Vincere will remain one of the year's best films) aren't even merely replicating the style and themes that composed their great films, but adapting to the changing times with either modern stories (Resnais) or a politically aware period piece (Bellocchio). With Wild Grass, Resnais addresses old age discontent somewhere between the kinetic elegance of De Palma and the soapier, saturated mise-en-scene melodramas of Almodovar. Yet he's never solemn or drowsily serious - he remains playful while poignant, not cynical nor slapdashedly whimsical - there's an odd blend of tones and visual ticks that, while varying in terms of effectiveness, nevertheless demonstrate a filmmaker who has not tired of his chosen medium and, for that reason alone, his film deserves praise.

Thankfully, ambition alone is not all Resnais displays throughout his PG rated film. A prologue establishes the narrative crux - after splurging on some shoes (the narration makes it clear that this woman's feet are deserving of attention) Marguerite Muir (Sabine Azema) has her bag snatched by a thief. The contents of her bag are dispersed, the wallet finding itself behind the left tire of a car belonging to Georges Palet (André Dussollier), a wealthy, married, but discontented bourgeois slackened by a life slowly running out of meaning. The wallet does not preface a meet-cute; rather, Georges' hope that this woman will show some verve in taking the initiative to not only thank him, but meet him as well. Resnais shoots these opening scenes with fluid long takes, oddly placed or unorthodox, with deep neons and monochrome lighting, but embodying his hybridization of melodramatic love story with noirish elements (societal unrest, personal crisis). Even creative split frame shots, as Georges gets a secondary vignette while driving, plotting his nervous phone call. Furthermore, Resnais intercuts shots on blowing tall grass throughout (Marguerite also has a head full of frizzy read hair), the metaphor not literal in the sense that the blowing grass (or wild grass) stands in for the unclaimed desires of Georges, but that nature's untamed allure often falsely enables a sense of lost time in the well-to-do, meaning Resnais' premise (adapted from a novel by Christian Gailly) isn't merely a trite tale of ennui (or midlife crisis, if you prefer), but a grander meditation on contrasting environments - the constructed reality with the real, that which exists outside of the societal - the wild grass, uncultivated, but not meant to be idealized and romanticized, since such fetishizing only leads to death and despair. It's an unspoken portion of the film's larger themes that could go unnoticed amidst its simultaneous flair for the absurd and the sublime.

Ultimately, though, Resnais' film isn't a celebration of either bourgeois complacency/frustrations or charting the unknown - it is about the human spirit, in all of its peccadilloes, idiosyncrasies, and imperfections, seeking solace when a chosen path no longer allows it. Resnais seems to suggest in a closing bit that reincarnation alone is the answer for traversing other paths, but then again nothing is rigidly defined in his world, nor is it required. The fuzzy edges give wonder to not just the characters' anxieties and pursuits, but the act of filmmaking itself.

Posted by Clayton Dillard at 4:05 PM