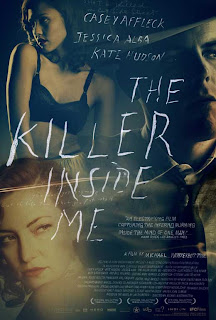 The Killer Inside Me aligns very well with No Country for Old Men and, in some ways, its consideration of cinematic violence is even more astute. To be clear, Michael Winterbottom's film in no way approaches the Coen Brothers' artistry in terms of mise-en-scene and sound design - few can even approach their impeccable abilities on those terms. Yet, Anton Chigurh's choking a deputy with handcuffs, capping a passer-by with a cattle gun, and taking off the shoes to ambush a few drug runners with a silenced shotgun are, unquestionably, "cool." Not just cool, but since the exterior narrative is deemed "worthy" and "authentic," mainstream critics are able to rationalize the destruction as suitable and passable. Winterbottom's polarizing film does not make the violence "cool" (or, in Tarantino/Ritchie lingo, "stylized") - nor does it completely unaestheticize it for some kind of Redacted faux-verite. Furthermore, neither is it "silly-fun" like the 2010 abominations The Losers, Kick-Ass, and Red. The Killer Inside Me deftly deconstructs the serial killer coda and the presentation of violence that accompanies it.

The subversion begins with an ironically colorful credits sequence, differentiating between the real (actors names) and the fictional (the characters they play). A daring, almost virtuoso choice, countering the posturing seriousness that's expected. The film is, of course, adapted from Jim Thompson's famous novel, about Lou Ford (Casey Affleck, having just played Bob Ford, a cinematic link Winterbottom is certainly aware of), a seemingly friendly and law-upholding deputy patrolling a small West Texas town during the 1950's. Fortunately, Winterbottom doesn't simply use the retro setting as means for constructing another brutally banal neo-noir. Rather, he problematizes post-modern inclinations by refusing to engage them, yet by retaining the brutality (especially against women), he's not got his head in the clouds like Steven Soderbergh's The Good German, which completely confuses and offends decent taste through a simple-minded juxtaposition of post-code decorum (swearing, depicted violence) and authentic 40's sheen (he used cameras from the period to shoot the film). The Killer Inside Me is much fuzzier, authentically troubled, and without guilt.

Female critics have torn the film apart for its depiction of violence against women. Ann Hornaday of The Washington Post says: "As for the misogynist brutality, it is indeed depraved, made more so by the fact that its female victims are depicted as loving their abuse right up until it turns murderous." Indeed, lonely hooker Joyce (Jessica Alba) receives a literal spanking from Ford in one of the film's early scenes, and initially responds in pain, before turning into pleasure. Ford's girlfriend Amy (Kate Hudson) likes her sex a little rough too. Ultimately, both women are brutally beaten to death by Ford - repeatedly punched in the face and kicked in the stomach. Winterbottom's choice to depict the scenario in this particular manner reveals just that - that it is a choice, and one totally in the director's hands. Much like Haneke's Funny Games, he is not merely indulging in thoughtless misogyny, but questioning modes of representation altogether and the viewer desire inherent (even better, Winterbottom does it without condescension). So, if he had been a good liberal, he would have made the women resist any form of pleasure from punishment, fight back and remain strong through Ford's murder attempts, and shown their deaths in a "tasteful" way, perhaps one that isn't as literal? Is that how the course of logic proceeds? If so, the hypocrisy is revealed, meaning that violence becomes "acceptable" so long as a check-list of politically correct behaviors and reactions are met - or so long as it's all played for laughs. Winterbottom throws out the checklist on this front, and others as well. Casey Affleck's performance and character in no way adheres to expected scenes of psychological struggle and torment. Winterbottom fumbles only sporadically as he unwisely peppers in a few instances of internal flashback, showing moments of Ford's childhood. Otherwise, the proceedings are anchored by an almost outrageous disconnect from causality, until it unfortunately settles in for a more routine police procedural narrative. Nevertheless, everything in the film is about a tick or two off from the "Oscar" mode many critics and viewers hope to embrace. Winterbottom's film isn't simply anti-cinema or deliberately contrarian either, but on a firm ground between the two, revealing the glibness of politically correct modes and expected cinematic norms.

Posted by Clayton Dillard at 2:40 PM