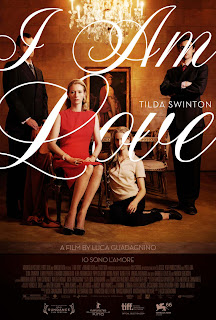 Luca Guadagnino's I Am Love is one of the most convincing crib-jobs in recent memory - drawing upon influences like Douglas Sirk, Luchino Visconti, and Stanley Kubrick, the director manages to wring something remarkably adept and perceptive from his overt idols. Even if his film does not rank with the best works of these antecedents, it nevertheless displays the director's ability to replicate and appropriate various styles, then produce something coherent and, in some ways, forward thinking. Ultimately, Guadagnino probes an ontological question - how to produce something "new" or fitfully transition into an evolving filmmaking period when artistic influences are so prevalent. Inherent to this question is identity, and Guadagnino deftly integrates these questions into his narrative of patriarchal dominance spear-heading generational difference. Thus, the diegesis compliments the meta-text, producing a simultaneously cerebral and affecting film, if somewhat overblown or overwrought in stretches.

A gorgeous credits sequence begins the film, as snow falls on Milan, the streets and tall buildings covered in a blanket of cold. Segueing to what turns out to be a prologue of sorts, the Recchi family gathers at their estate near the turn of the 21st century, a night on which the family business (a clothing factory) will be handed-down from father to son. The warm interiors contrast the cold exteriors, which Guadagnino effectively contrasts. A dichotomy of spaces is established, much in the Sirkian sense, as the family members begin filing into the house as the servants hustle to prepare the necessary food and dining arrangements. Guadagnino uses slow zooms and tracking shots a la Kubrick, establishing both the family members and the layout of their elaborate estate with Renoir-like precision. Various comments and snippets of conversations establish a complicated family history, including athletic prowess and traditional decorum, foremost among them an adherence to convention gender and patriarchal roles. The patriarch's son Tancredi (Pippo Delbono) inherits the business along with his son Edo (Flavio Parenti), a track athlete who's just finished runner-up to friend Antonio (Edoardo Gabbriellini). Edo's mother Emma (Tilda Swinton) says little during the proceedings, but takes notice of Antonio, looking out through a window as he traverses away from the house, through the snow. Desires, feelings, and mores are changing, and Guadagnino forces the question upon cineastes as well - how does one shift filmic modes in order to deal with this? Guadagnino seems to suggest that reverence, oddly enough, is what's needed, especially through a mixing of styles and "pastiching" various filmmakers. Far from a new notion, Gudagnino nevertheless holds steadfast to his convictions, sincere in both formal and thematic concerns, and the film rarely loses credibility because of it.

Jumping to a few months later, the crux of the narrative falls on Emma's pursuit of Antonio, seeking "forbidden" desires in both the racial and social sense. She also discovers her daughter is a lesbian - no one wants to fulfill their "expected" sexual roles, just as cinema can no longer occupy a static space; tensions crop up in both areas and that duality remains fascinating throughout. Less so are forced metaphors like close-ups of budding flowers as Emma and Antonio have sex for the first time. Or a third-act "twist" that unconvincingly brings about the tragic circumstances to end the film. Guadagnino's more melodramatic inclinations don't quite work because of his intrusion, his insistence on having his film be so calculated and tightly wound. Likewise, a concluding image is supposed to be haunting and foreboding, but again seems forced and inorganic. However, these flaws do not negate the film's artistic aim and, on the whole, success of formal and thematic replication. Of course, one could just as easily go to the source of Guadagnino's influences, yet there is something inherently valuable about a well-performed melange and I Am Love remains at least sporadically compelling, even amidst its less formidable elements.

Posted by Clayton Dillard at 8:56 AM