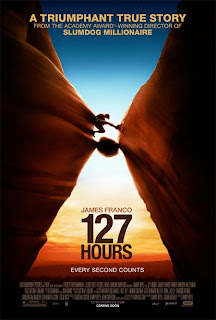 127 Hours should have been more honestly titled James Franco vs. Danny Boyle, since the Oscar winning director takes every opportunity imaginable to undercut his actor's magnificent performance. Credit for some of the film's ultimate failure must also be attributed to the screenplay (co-written by Boyle and Slumdog Millionaire scribe Simon Beaufoy), typifying the simplistic dualities and thematic beats that have composed nearly any of Boyle's films. It may be a stretch to call him a hack , but 127 Hours proves, at the very least, that he's completely one-dimensional, unable to forgo his expected tactics of flash cuts, speeding through shots, and split-screen, ultimately amounting to nothing more than noise and visual diarrhea. Here, his cognitive process assumes the only way to tell the amazing true story of Aron Ralston (Franco), whose arm became pinned by a rock in a Utah canyon, is to almost amp up the artifice, with shots from inside his water bottle, laying on thick moments of techno pop, shrill ambiance, and even a moment where he literally goes inside the camera Ralston uses to film himself, quickly showing the rewinding of the digital tape. All of these attempts to bolster the "suspense" reveals Boyle's shortcomings as a thinker, apparently unaware that the gravitas in the film should come from Ralston's slow, delirious realization of the absurd scenario he's been placed in and the nearly unthinkable deed he'll have to perform to get out.

Boyle's solipsism is evident from the opening three-way split screen shots of people exiting trains, cheering in soccer stadiums, and filing through the hustle and bustle of city life. Likewise, Ralston's late night drive into the Utah desert is superimposed with logos of McDonald's, Taco Bell, and several other chains, a lead-pipe juxtaposition of Ralston's reason for seeking solace in the tranquility of the subliminal canyons and underground coves. For Boyle, this simple dichotomy is all that's need to establish motive, but such calculative reasoning denies Ralston's pursuits the depth and sincere spirituality needed to flesh him out to human status. More shenanigans: Ralston meets up with two hikers, Kristi (Kate Mara) and Megan (Amber Tamblyn), persuading them to let him lead their way. Ralston snaps a three-shot of them with his camera, the image freezes, then whisks away like some sort of exited page on a MacBook Pro. Superfluous to no end, Boyle continues to suck any genuine verve from the film's proceedings, never ceasing to indulge his apparently never-ending thirst for formal tinkering.

Moreover, once Ralston takes his tumble and is pinned by the mammoth rock (at about the 20 minute mark), Boyle slyly comes in with the film's title, proposing an almost 24-like race against the clock. Boyle unwisely tries to speed up time rather than slow it down, opting to reflect Ralston's growing sense of doom through more obnoxiousness, including a nearly ten mile, 200 MPH aerial shot from Ralston's perspective to the back of his truck, where he remembers a full, sweating Gatorade, a dreamed monsoon that frees him, and several flashbacks to a past girlfriend, who at one point says to him (no lie), "You're going to be lonely for the rest of your life, Aron," and, of course, being stuck at the bottom of a massive canyon, it looks as though she may have been right. Moreover, it's a further indictment on Boyle's lack of subtlety, having to spell out the pathos literally, through dialogue.

While Boyle's directing tactics remain as suspect as ever, Franco's performance, humorous, sincere, and remarkably free of histrionics, is an antidote to the film's excesses, humanizing Ralston despite Boyle's every attempt to put the attention squarely on himself. It's an actor's film that Boyle tries to make a director's, yet Franco reveals his director's conceit with graceful clarity, remaining compelling and modest while becoming progressively unhinged, and giving what is sure to be the year's finest piece of acting. Likewise, A.R. Rahman's score works well within the diegesis, and the choice of Sigur Ros's "Festival" once Ralston reaches the surface wonderfully evokes inexpressible elation at being alive. If only Boyle had displayed a little versatility, depth, and consideration of his own, 127 Hours may well have matched Franco's brilliance.

Posted by Clayton Dillard at 9:39 AM