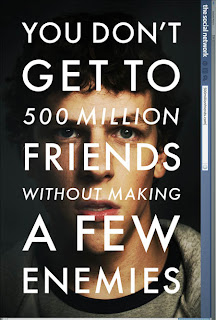 Given David Fincher's past propensity for sheer technical exercise (The Curious Case of Benjamin Button being his most egregious offense), The Social Network comes as a bit of a mild surprise; it's understated, only sprinkled with CGI touches (the deftest feat coming via a dual role played by the infuriatingly charming Armie Hammer), and rarely engages self-indulgence (it's a breathlessly paced 120 minutes). The credit for that pace belongs as much to Aaron Sorkin's literate, but thematically moderate script, integrating deposition hearings as a Rashomon-lite narrative structure, supplementing a Citizen Kane-ultra-lite tale of petty revenge cum capitalist nightmare. These meaningless comparisons are meant to mock the hype machine created by mainstream critics as a validation of their cultural stature - Peter Travers' proclamation (having been specially selected to see the film back in August) that it is "the movie of the year that also brilliantly defines the decade,” hyperbolic as that may seem, proved only a catalyst for other critics to continue the reductive accolade dogpile. Everybody's stuck in Oscar bait speech, making analytically diminishing statements ("if Coppola had been into computers, he would have made The Social Network") in place of actual evaluation and consideration. While Armond White's review of the film is self-interestedly dismissive and verging on self-parody, his opening insight, that it may be five years before anyone can view the film without unconsciously engaging the hyperbole, is spot on. This is all to say that the film, itself, is good, intelligent about the predicated dishonesty of cyberspace subterfuge, and partially insightful regarding the compounded loss of both civility and human decency created through the supplementation of narcissism.

The film's ultimate fault and prevention of greatness, however, is an inability to coherently make radical sense of both its enigmatic protagonist and locus of the hate and anger fueling him. Ambivalent to a fault (yet what filmmaker under 50 isn't, these days?), little in Fincher's direction works to solidify a moral/ethical stance on Mark Zuckerberg (Jessie Eisenberg) and his cronies. Likewise, Sorkin's stance on the material remains even more indecisive, opting for a "the truth can't be known" approach which, though it makes for harrowing sequences of finger-pointing and shouting, ultimately lacks any resonance beyond bitter irony. In the opening scene, Zuckerberg's told by his soon-to-ex Erica (Rooney Mara) that, in the future, he shouldn't falsely believe women don't like him because he's a nerd - it's actually because he's an asshole. Eisenberg's bitter face emotes wounded pride, something his 1600 on the SAT can't answer. In the greatest opening credits sequence of the year, Mark quickly walks across campus to his dorm. Fincher's in pure neo-noir mode here - fatalistic and daunting, using Atticus Ross & Trent Reznor's kinetic, techno score as a chilly foreshadowing of both Mark's bottled up resentment and loneliness. The genesis of Mark's ascendancy and plunge (though he seems to never enjoy much of any of it) lies upon petty revenge - the desire for retribution. Of course, Mark's only means lies in mediation, a way to strike back without the potential of face-to-face humiliation. One of Fincher's strongest directorial sequences (visually and viscerally, at least) comes during Mark's initial expulsion of vitriol, a montage of sex, drinking, typing, hacking - the conglomeration being sensory overload. It's bravura, but problematic, as Fincher and Sorkin amp the sex appeal without much regard for its diminution of decorum. That lack plagues much of the film's bite, since the duo seem only interested in pop-psychoanalysis (Mark's motivation is not actually money or power, but the one that got away). The film's final scene, of Mark sitting at his computer, hitting refresh in hopes that Erica will "friend" him, reinforces the film's knee-high depth - it's but a rather simple irony.

Likewise, much of the film relies on expository sequences that function mainly to further the narrative, rather than complexly construct character motivation or thematic depth. Namely, the material with the Winklevoss twins (Armie Hammer) does little to register in regard to questions of power hunger or cognizant betrayal. Moreover, an incredible rowing sequence using a modified version of "In the Hall of the Mountain King" is just that - a great piece of visceral filmmaking, but tangential to any furthering of a discourse. The moral resonance in the film lies with Eduardo Saverin (Andrew Garfield), the company's CFO and, naturally, best friend of Zuckerberg. He's the Jedediah Leland figure, if you will, betrayed and left for financial dead because of both his "outdated" principles and naivete. Garfield is vulnerable and empathetic throughout (sans a curious segment in the film where his demonized Asian girlfriend comes back for revenge), but Fincher doesn't probe his devastation deeply enough - especially once Napster wunderkind Sean Parker (Justin Timberlake) becomes part of the equation. He exits the film in a fit of rage, slamming Mark's laptop to oblivion once he learns of his horribly diluted stake in the company. It's one of The Social Network's few cathartic moments - a show of anguish and humiliation at having believed in someone so unfeeling and emotionally unresponsive.

Nevertheless, The Social Network is slyly perceptive about the issue of sex, at least with regard to Facebook's role. Like the emotional stoicism of Mark's hatemail, the sexual interaction takes its form in the "fuck," personified by Eduardo and Mark's bathroom stall session with two newly acquired "friends." It's a further explication of the tool's paradoxical human disconnect, facilitating interaction while precluding it, emphasizing the sensory over the emotional. Fincher's film functions in this way, though because of his non-committal stance, one's never positive whether he's more inclined to condemn or embrace. Not that he has to do either, but the film itself is much like its protagonist, brilliant but unruly, active but enigmatic. That congruence of character/form often works in Fincher and Sorkin's favor, but a more decisive approach, righting Mark's wrongs through responsive rather than objective filmmaking, could lend their discursive and visual prowess a touch of needed maturity - a move from fashionable eclecticism towards the kind of personal statement sorely needed in an era founded upon irresponsibility.
Posted by Clayton Dillard at 10:57 AM