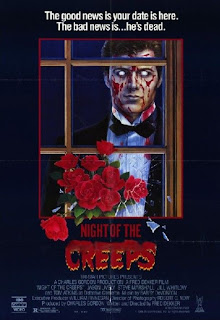 Night of the Creeps, Fred Dekker's pre-The Monster Squad horror send-up, falls into the category of camp for camp's sake. If one has any doubt during the silly opening scene aboard an alien spaceship, or the following B&W homage to delinquent/teen horror of the 1950's like The Blob,it's put to rest once the three principles' names are revealed: there's Chris Romero (Jason Lively, best known to me as Rusty in National Lampoon's European Vacation), James Carpenter-Hooper (Steve Marshall) and Cynthia Cronenberg (Jill Whitlow). The narrative can best be described as a procession of goofball nonsense following two nerds trying to land the girl of their dreams, who end up amidst nights (plural) of slug-like creatures inhabiting the bodies of their victims. Dekker intends this to be both reverential homage and 80's update (the swearing, tits, and gore comprising the bulk of the latter), yet nothing in his script or direction transcends pedestrian taste (Tom Atkins' police sergeant says at one point, "is this a homicide or a bad B-movie?"). There's no real stake in the dickhead protagonists' plight for maturation - merely more dopey antics. Even the closing onslaught of zombie kills and intentionally hokey one-liners can't rouse any real joys or thrills because of its innocuousness. Here's a million dollar idea: a satirical horror film, so secure in using both humor and gravitas simultaneously, that it doesn't have to constantly undermine itself through winking self-parody.

Posted by Clayton Dillard at 6:39 PM