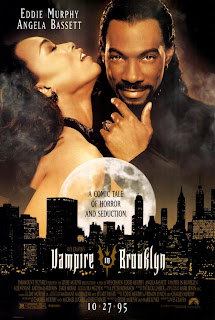 There's something Shakespearean about Vampire in Brooklyn. It uses supporting characters as jesters and observers, slyly supplementing and commenting on the narrative, though they never take the shape of "developed" characters. Likewise, Wes Craven's directorial sensibility ventures away from portentous vampiric lore and more towards absurdity, severing any sense of verisimilitude or continuity through Eddie Murphy's pre- The Nutty Professor multiple role effort. That disconnect may go a long way in explaining the film's poor reception, both critically and commercially, but both parties missed the point - Vampire in Brooklyn is a spectacle, comprised of theatrical flourishes and heightened realities undermining its inner-city setting. It is a farce with gore, a Grand Guignol-style show of horror, blood, and delight. It is not camp, per se, but an extraction of cultural stereotypes into an alternative setting, a far more interesting concoction than any possible attempt at a straight-faced horror film given the comedic talent of its star. 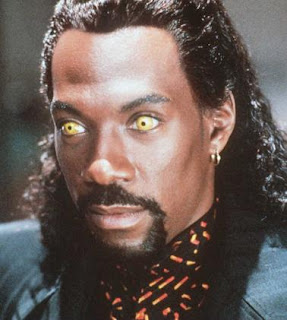 The narrative is as such: Caribbean Island vampire Maximillian (Murphy) travels to New York in order to find a bride. He knows of Rita (Angela Bassett), an NYPD detective whose father was a vampire, making her a natural selection. He quickly turns indebted-to-the-mob hustler Julius (Kadeem Hardison) into his Renfield, and soon he's on his way to finding Rita. All of this is, in truth, of little importance, since the film is performance and comedically driven. So what is it about the film that makes "film critics" react in opposition? The film scored only 3 positive reviews on Rotten Tomatoes, against 25 negative. When in doubt, turn to Roger Ebert for insight: "ex-model Jerry Hall turns up as a white woman who, attacked by the vampire, assures him, "I understand the Negro people." That a person of her age would say this might just barely have been possible when "Blacula" was made; to put it in a 1995 movie and hope for a laugh is a sign that the filmmakers are seriously out of touch." Ebert later goes on to question the film's use of the N-word, perfectly illustrating not that he objects to how these points are made, but merely that their presence makes him uncomfortable. Furthermore, Craven's film (from a script co-written by brother Charlie Murphy) does not attempt to establish a distinctly "suitable" context for the usage of social commentary, so perplexed critics react with ironic detachment, replacing their confusion with adamant disapproval. 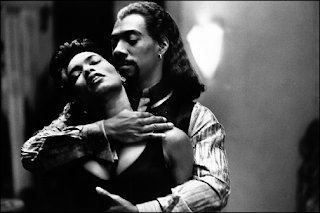 Nevertheless, it is Murphy's central performance that lends the film it's keen edge, especially when he morphs into a preacher sermonizing on the necessity of evil, an almost Bunuelian-touch in the midst of its vampire hokum (which the treats appropriately as such). Another Murphy character is Guido, an Italian-American inserted merely for Murphy to work, through caricature and stereotype, as a way to wackily throw a wrench into narrative normalcy. And it is funny. Bassett and Murphy are sexy together too; her vulnerability is superficial and underwritten, but Bassett makes it work, especially as the traditional "woman in trouble," only now she's able to fend for herself. All of these elements certainly don't cohere in any logical progression or unified discourse - but that "lack" does not negate their effectiveness in the moment. Indeed, this differing quality explains critical derision, since the critical mind, when confronted with functioning or abstract parts that do not make an explicitly defined whole, explains it away as "a mess" or "amateur" or "misfire" or, my favorite, "uneven." Vampire in Brooklyn is uneven, meaning it has varying tones, visual stimuli, and intents. But in my world, that's called being multifaceted.

Posted by Clayton Dillard at 6:18 PM