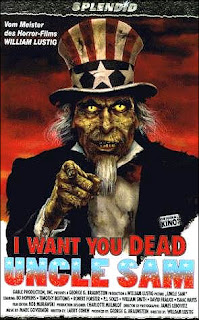 The lofty prospect of a Larry Cohen script under William Lustig's direction only comes to moderate fruition in Uncle Sam, mostly due to both men dropping the ball in the third act. A fascinating set-up has Sam Harper (David Fralick) being killed during Desert Storm; three years later, his sister, wife, and nephew are still grappling with his death, especially once they're informed that his dead body has finally been discovered and is soon to be returned home for burial. The nephew Jody (Christopher Ogden) finds solace in calling Sam a hero, and vows to enlist when he's of age. Cohen and Lustig communicate these sequences with the utmost clarity, displaying how young minds are constructed to follow the Nationalistic order. As Jody says, "I'll do whatever the president asks of me when I'm a soldier, because he knows more than we do." Intervening is veteran soldier Jed Crowley (Issac Hayes), who tells Jody that "we used to know who and what we were fighting. Now everybody is confused." These elements nicely stage a narrative for engaging complex subjects, and Lustig films them without pretension, modestly and with conviction. What doesn't work, however, is the film's strictly horror half, when the body of "Uncle Sam" comes to life, dons the red, white, and blue duds and starts killing people during a July 4th celebration. This shift, though initially apropos in its allegorical dimension, betrays the more sincere aspects of a film confronting government lies and the selling of propaganda to susceptible children. Especially when the killings begin to have nothing to do with this thread and eventually become a self-parody. It makes one long for Bob Clark's masterpiece Deathdream, a thoroughly allegorical and intelligent film dealing with the impossibility of civilian assimilation after facing the horrors of war. Uncle Sam could have reached somewhere close to those heights if it had remained steadfast to its convictions, rather than calling an audible in favor of lesser thrills.

Posted by Clayton Dillard at 12:35 PM