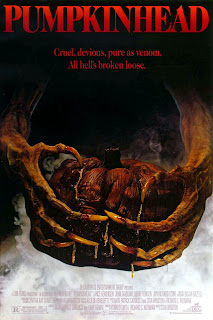 Pumpkinhead is a terrible movie, made all the more disheartening because its interesting premise is squandered in director Stan Winston's incompetent attempt to balance horror and pathos, religious symbolism and vigilante justice (his only subsequent feature involved Anthony Michael Hall and a gnome). The special effects maestro has no sense of narrative progression, tonal consistency, or, most importantly, no respect for a viewer's good faith, since it becomes clear that Winston's true interest lies in the titular demon, summoned by Ed Harley (Lance Henriksen) to eviscerate a pack of wild teenagers who accidentally killed his son during a dirt bike race. The death itself absolutely defies logic or coherence, coming about through an inane series of excuses and coincidences that puts him in danger. My quibbling about such things usually remains minimal, since narrative liberties are often necessary to pursue thematic questions. Here, however, it's just a silly ploy to put the narrative into motion. Unfortunately, all of the southern black magic plays like the hokum it is, letting the demon kill a few characters before Ed, conveniently, has a change of heart, unconvincingly adding a layer of guilt to his initial need for vengeance. Oddly enough, Pumpkinhead's attempt to add "character development" or various genre elements to the Alien mold just complicates and muddles things since Winston doesn't have a strong enough directorial eye to navigate them convincingly.

Posted by Clayton Dillard at 9:31 PM