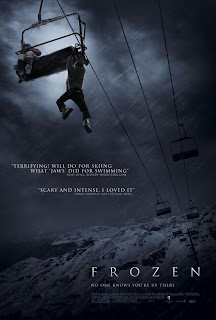 The mechanical workings of a ski lift open Adam Green's Frozen, a perfect metaphor on two levels: a converse symbol for the physical act of a film running through the projector, beginning as an acknowledgement of its own artifice and, more importantly, an ironic juxtapostion to the living, breathing, feeling characters that are soon to be stranded because of the machine. Moreover, the central conceit (three people stranded in the freezing air on a ski-lift chair) can easily be read as a larger allegory for free will, isolationist politics, and/or capitalist luxury, layering the tension and intellect to supplement the horror tropes. What director Green fortunately graps is that the frights are not an end in and of themselves, but a foundation for exploration of larger, more interesting issues via his white, early-20's, middle class characters. 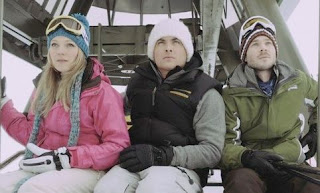 It is not the characters' "likeability" that gives the film gravitas, but that they are human - they have self-assurance, but anxieties too, even if someone like Dan (Kevin Zegers) believes he can circumnavigate having to purchase a lift ticket by bribing the operator with $100 (he claims this will work because the guy makes little money), and he's right (of course, he's also the reason, due to work schedule anxieties, that the trio becomes stranded). Dan's girlfriend Parker (Emma Bell) and best friend Lynch (Shawn Ashmore) are the other two, each subtley battling for Dan's affections, the girlfriend-less Lynch trying to score a later date with sexy Shannon (Rileah Vanderbilt) in order to prove he's not inadequate. That none of this set-up leads to any later developments is a brave choice, but the correct one, illustrating how abruptly life can be altered, perspectives immediately changed, without the prospect of outside intervention. Every possible savior fails, due to either nature's interference or personal distraction.

Once the chair stops and the three become stranded, the film opens into various avenues, allowing diverse readings, and complex layerings of motive and discourse. Dan, the assured kid who's been able to finagle his way out of any circumstance, defies geometrical logic, and suffers for it. He goes from his "gut," not his head, and the ultimate result is a painful death. Lynch and Parker remain, grief stricken and desperate, but retaining a sense of humor and humanity. Perhaps that's what makes Dan's horrific end all the more disturbing, since these characters view death with a light touch, not wholly jokey, but realizing their mortality and vulnerability. No one ever speaks of death or belief explictly (perhaps for the best), but the progressive blame game, sentimental posturings and ultimate reconciliation all reinforce these various discursive modes and a degree of sincerity regarding the scenario's microcosmic apocalypse, the isolation and slow, cold death a fierce and inescapable process. Things do not end completely hopeless, but the spared survivor has convincingly confronted class, nature, mortality, and selflessness in the course of a 90 minutes, a rare instance of depth through minimalism in modern filmmaking.

Posted by Clayton Dillard at 10:36 AM