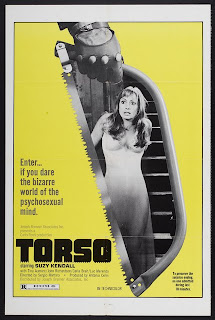 Sergio Martino's Torso makes the same mistakes as an earlier reviewed film on this blog - The Eyes of Laura Mars. It lack sufficient style, thought, and an overall gravitas to be compelling, even though it is competently pieced together. Moreover, the films share thematic material - that being a killer who fetishizes his victim's eyes, brought about by childhood trauma (concurrent within any Giallo). The similarities cannot go unmentioned, and the later film's script (co-written by John Carpenter) appears to have aped much of the ideas. In Torso, a group of college students are terrorized by a man wearing a stocking on his head; just before he kills his first victim (by tearing her eyes out) he flashes back to a doll, lying on the ground, his fingers about to come into contact with its eyes. This type of psychological fetish comprises nearly every motive for Gialli killers, and while not necessarily a handicap or hindrance in and of itself, the reoccurance necessitates an added bit of ingenuity and insight, something Martino does not do. Furthermore, the killer's identity is hilariously transparent, as only fifteen minutes into the film, the heroine says to a male friend, "You have such lovely eyes." He responds, disheveled, dejected, "Please do not tease me about such things." Surely enough, this is indeed our man, a detail that typifies Martino's surface notions of depth and insight. Nevertheless, Torso is an hilarious film, chocked-full of knockout moments, such as a child falling from a cliff to his death, or the killer deliriously screaming, "Bitches! Bitches! Bitches!" because of his impotence. While there's nary a dull moment because of the ineptitude, it's quite hard to commend the film for this, thus relegating it to "midnight movie" status. I'm not suggesting that as an inherently inferior position (far from it), but in the case of Torso, it's outlandish enough to make serviceable fodder for those seeking a bad film for a good time. The film's silly trailer should help make that point more concretely.

Posted by Clayton Dillard at 1:25 PM