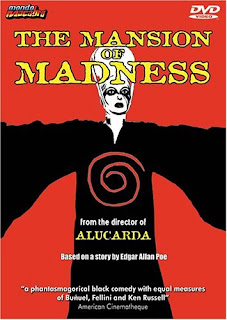 Juan López Moctezuma's The Mansion of Madness clearly draws heavily upon Edgar Allan Poe's short story The System of Doctor Tarr and Professor Fether - yet I'm not sure even Poe could ever have envisioned as bizarre a scenario, characters, and actions as Moctezuma has. If Alucarda is bizarre, The Mansion of Madness is just fucking nutty, but then again, who's looking for restraint when it comes to crazy people? One character puts it best early in the film when he says: "Mentally disturbed people frighten me." Such a revelatory insight should not go unmentioned. Nevertheless, Moctezuma's absurdist inclinations are precise and specific throughout, utilizing editing for the primary comedic effect - a tact that more than shows his cognizance and sense of humor. If the film is noticeably lacking any relevance outside of hilarious mental patients, including a crazy human chicken, endlessly riotous line readings, and an impressive visual style to hang them upon, then you're looking for the wrong qualities - accept the grotesque perversion coupled with Bunuelian surreality, and appreciate Moctezuma's masterwork of subversive exploitation. 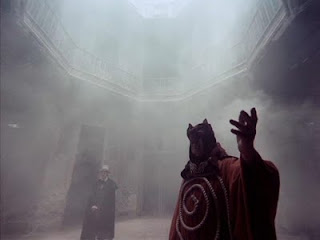 Journalist Gaston LeBlanc (Arthur Hansel) travels through the woods to the mansion of Dr. Maillard (Claudio Brook), a seemingly progressive man who posits an alternative way of dealing with mental patients - a soothing system, which instead of telling the patient their delusions are false, reinforces their psychosis by allowing them to live it out. Maillard believes this technique will eventually allow the patient to dispel of the alternative personality. Moctezuma masterfully balances this walk and talk sequence, implementing carnivalesque marching music to counterbalance the capture and torture of LeBlanc's accompanying visitors, who decided to turn back before entering the mansion. That brings the pair to a sick fuck, a guy who's glued feathers on him, clucks and struts like a chicken. LeBlanc simply responds to Maillard's explanation: "remarkable." The intellectual, when confronted with something that confounds his intellect, responds submissively, not wanting to run the risk of revealing his "ignorance." The casting of Brook explicitly recalls his role as Simon in Bunuel's Simon of the Desert, a reflexive admission of taking Poe's reticence of scientific "rationality" and turning it into surrealism, most strikingly coming to fruition during a confrontation with mental patient Dante, who hangs upon a rack, thin and fragile, on the verge of death. Explains Maillard: "consider this the less soothing part of my soothing system." Of course, Maillard is crazy and eventually incapacitates LeBlanc and female slave Eugenie (Ellen Sherman) in an attempt to "build an empire." Poe's themes of abuse of power and scientific danger remain, but it is Moctezuma's creepy, funny, shocking flourishes that give the film verve, literally ending in a hail of gunfire, dance, and music.

Posted by Clayton Dillard at 10:42 AM