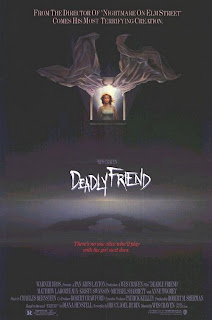 Joe Bob Briggs has called Wes Craven's Deadly Friend "A Breakfast Club version of Bride of Frankenstein." That's about right, and it's enough to make the film worthwhile as a purely genre exercise. Techno wiz Paul (Matthew Laborteaux) moves to a new place, bringing along with him a self-built robot named BB. Along with new friends Tom (Michael Sharrett) and Sam (Kristy Swanson), the trio become good friends - and there's even the potential of a little romance between Paul and Sam. However, Sam has a controlling, abusive father. Equally pestering, an old hag neighbor who absconds with their basketball and pulls a shotty on them anytime they step near her property. The (im)perfect storm of narrative dominoes fall, the neighbor destroying the robot and Sam's father beating her and leaving her brain dead. Riddled with grief, the friends decide to resurrect Sam, using the computer chip formerly used by BB. There's nothing here that deserves immediate mentioning (except for a great death scene involving an exploding head and the basketball), but Craven navigates light-hearted humor with outrageous gore, though the final third is tonally confused, as the police are summoned and the film loses its keener edge. Craven cannot be blamed for the script's lesser aspirations (he didn't write it), though there is some ingenuity in its establishing build, especially if one does not know what's to come. Initially, it seems more sci-fi geared towards the robot, but the shift works because Craven makes it coalesce through pacing. He builds enough character momentum, narrative drive, and overall goodwill to make one not come down harshly on his enjoyable, intermittently thoughtful effort, with enough competent parts to overlook the lacking whole.

Posted by Clayton Dillard at 5:20 PM