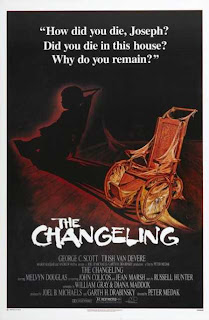 The Changeling makes the mistake of turning into a dreary, thematically heavy-handed thriller amongst some rather creepy elements. It's telling the film is produced by HBO Films - far too much of it plays like a run-of-the-mill job, its cold, distant aesthetic simply a poor, pale imitation of The Exorcist. There simply isn't enough substantive narrative weight as a genre film, nor the ingenuity in the form to transcend those shortcomings. An odd thing to say coming from Peter Medak, who usually lets his freak flag fly (The Ruling Class, Romeo is Bleeding). Above all, The Changeling's biggest mistake is playing everything straight, using the ghost story for an attempt at verisimilitude, an empty allegory about the return of the repressed with a political twist. 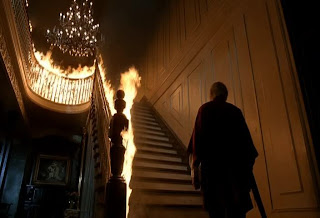 Medak's direction works well in spots here, but it's largely drowned out by a tepid narrative. In the opening scene, vacationing composer John Russell (George C. Scott) watches from a phone booth as his wife and daughter are killed in a freak accident. Years later, looking for a place to work, he rents out a large, broken down home. It's equipped with a handyman who cleans up the place and, of course, strange noises that cannot be explained. The film's only superb sequence comes during a seance, as it's discovered a young child's spirit remains in the house, lingering to have the truth revealed about his murder. In a virtuoso corridor dolly a la Last Year at Marienbad, the child's crying voice plays over the fluid, rapid movements down the hallways. Little else in the film matches in terms of giddy thrills. Reserved to the point of tedious (then unnecessarily overwritten once it's learned a high-ranking political official is involved), the film's elements never cohere in any remarkable way, opting for middling conversations heavy on exposition rather than building tension. Jack Clayton's The Innocents is still the ghost film to beat.

Posted by Clayton Dillard at 8:25 AM