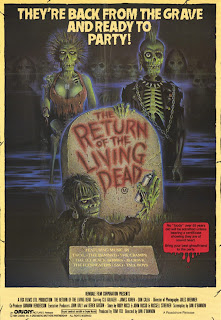 Watching The Return of the Living Dead and Night of the Creeps back-to-back is enlightening in several ways; namely, Dan O'Bannon's homage to Romero's zombie films isn't out to merely make a joke of them like Dekker's - O'Bannon realizes that true reverence comes in the form of simultaneous innovation, not merely recycling through a re-appropriation of tone and acknowledged self-awareness. Without question, The Return of the Living Dead's snappily paced 90 minutes is as wholly meant for fodder as Dekker's film; yet where the former surpasses is through a satirical conviction, ultimately conglomerating genre tropes, political overtones, and some hilarious dialogue exchanges (particularly from acting vets James Karen and Clu Gulager), even if the initial ingenuity wears thin amidst a standard narrative.

It's clear simply from the opening scene's beats and tone that O'Bannon comprehends comedy. Medical warehouse vet Frank (James Karen) explains where they get their skeletons: "International treaty. All skeletons come from India." Or how about the quickly stated imperative to newcomer Freddy (Thom Matthews): "Don't fool around. You're learning." The joke is in the tone, not the punchline - it's a slap in the face to campy one-liners (my favorite: a general returns home from work and his wife asks, "how was your day?" His response: "The usual. Crap"). The Romero homage comes full circle via the initial bumbling duo's unleashing of a chemical onto a nearby graveyard, causing the dead to come to life. Further cementing the film's subversiveness, the central teens are a pack of punk, anti-establishment rebels ("You like sex and death, Casey?" "Yeah, so fuck off and die"). Lucky for us, Trash (Linnea Quigley) likes to take her clothes off - and does so in an iconic sequence, dancing to SSQ's "Tonight (We'll Make Love Until We Die). However, once some acid rain starts to fall ("it's burning my skin!") and the zombie's come out (including half of a resurrected puppy), all focus turns to killing them - and the film loses most of it's edginess. There're some good touches (these zombies can't be killed by shots to the head, a couple of truly baffled paramedics), but overall the film can't sustain the energy of the first half hour. The apocalyptic conclusion screams Reagan-era paranoia, an interesting choice amidst the otherwise underwhelming second half.

Posted by Clayton Dillard at 5:41 PM