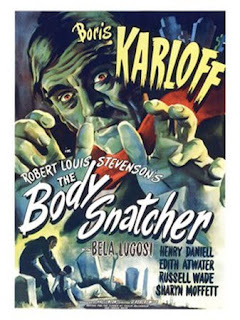 The Body Snatcher is a serviceable Halloween chiller, though not in the upper-echelon of either Boris Karloff or Bela Lugosi's oeuvre. The two get lead billing, though neither is really one of the three central characters - unfortunately, that's reserved for a menial thread about Dr. MacFarlane (Henry Daniell) and his well-to-do assistant Fettes (Russell Wade), who become obsessed with trying to cure a paralyzed small girl. Why is MacFarlane so medically prominent? It's because he gets dead bodies from a supplier, John Gray (Karloff). Naturally, Gray does not just steal the bodies from the morgue or crime scenes - he procures them himself by murdering innocent passers-by. Lugosi shows up in a nothing role as a retarded servant, though he and Karloff have a nice scene together. Visually, Wise's second collaboration with Val Lewton proves he can manage the shadowy expressionism, though it's expected presence almost becomes a hindrance, a cliche if nothing truly spectacular is to be done with it. Thematically, it's a cautionary tale of the dangers science and rationality can cause if not kept in check, and Dr. MacFarlane suffers severely for his transgression, even though he helps save a girl's vitality. The production code can be partially blamed for this, but the whole affair has the feeling of complacency, not trying to truly make an innovative or memorable work, but simply assemble a horror film to fit the second half of a double bill. Wise and company do so competently and with lean precision, but there's really nothing here much better films haven't explored and executed with greater gusto and shock.

Posted by Clayton Dillard at 2:26 PM