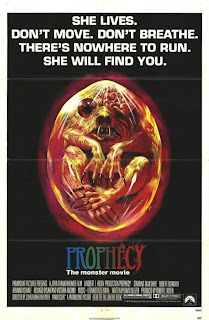 John Frankenheimer's Prophecy exists on odd terrain, somewhere between the more innocuous monster flicks of the 1950's and the increasingly gorier ones that would begin to pop up in the early 80's. That's not the film's problem, though - it's frightfully stupid and hackneyed, inserting a dopey plot of lumber industry goons against land loyal Indians (lead by Armand Assante) amidst the emergence of an 8-foot-tall mutant beast, spawned from the log company's excessive wastes. Married ecologists Maggie Verne (Talia Shire) and her husband, Dr. Robert Verne (Robert Foxworth), investigating the goings-on, become empathetic to the Indians and generally critical of the log company's neglect for preserving the land. All of this plays painfully rote, drudging along to its eventual conclusion of the jerks getting their comeuppance, the monster being killed, and the cautionary tale restoring a semblance of order. Even if someone wanted to defend the film as horror in the "classical" sense or "campy" fun (these disingenuous assholes and their love of camp, fuck), it does not alleviate the fact that Prophecy is worthless in every sense of the word.

Posted by Clayton Dillard at 9:49 AM