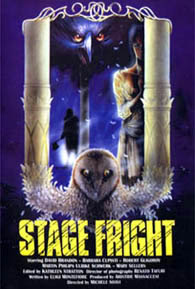 Stage Fright, the meta directorial debut of Dario Argento protege Michele Soavi, signals a further bridging of the gap between Gialli and slasher, isolating a small acting troupe inside of a theater, the unknown killer roaming among them. It's an important distinction, seeing how the Italian mold eventually melded with the American, though Soavi retains the Gialli's sense of farce and outlandish humor. Case in point: the killer dresses in a Big-Birdesque owl costume, at one point killing an actress on stage, while the rest of the cast thinks it's all just part of the scene. Explicitly toying with the increasingly imperceptible line between theatricality and reality (a line blurred during the opening sequence), Soavi deftly composes both a reflexive think-piece and an efficient, outright horror film. 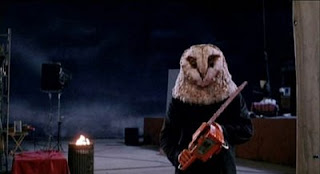 That duality functions well, especially in the set-up, where fame and money hungry director Peter (David Brandon) decides to exploit the early death of a wardrobe girl for extended publicity and profits. His artistic drive (reinforced by greed) slyly critiques art's exploitive and voyeuristic inclinations. It is by no means a novel concept, but Soavi's application of it to the horror film lends ingenuity, especially in how he adapts that moral foundation for a series of killings as ruthless and uninhibited as anything from his mentors Argento or Bava. The stage works to heighten the psychological distress, personifying the entrails of the brain through adjacent wires and light cords. Moreover, it is the audacity of the kills that stacks nicely upon Soavi's admitted fascination with murder, here more cathartic than indulgent. Highlights include a pick-axe through the mouth (Freudian to a fault), drill through the back and out the front, chainsaw wielding, axe to the head (brutal in its ephemeral thud) and, what would a horror film be without, a final bullet between the eyes. Stage Fright may ultimately be silly in its central conceit, but a jazz score heavy on saxophone helps to add even more absurdity to the hardcore violence by undercutting it, and that absurdist quality goes a long way to fulfilling Soavi's heightened, frequently hilarious metaphor.

Be sure to check out the trailer, one of the dopest I've seen in awhile:

Posted by Clayton Dillard at 10:56 AM