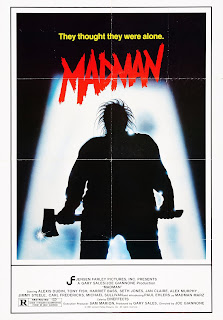 Madman typifies the tedium many non-converts associate with the slasher film. It is but an outright Friday the 13th knockoff, set in the nameless woods of a nameless place on a nameless night. An old man waxes spookily about a regional legend - a wronged man that, if his name is spoken too loudly, will return to kill off those who committed the transgression. Fine by me - especially after spending a mere 20 minutes with these bland, lifeless excuses for human beings. None of the faces or names deserve mentioning. There's a fairly hot older counselor (played by Gaylen Ross of Dawn of the Dead fame), but even her momentary nudity while getting into a hot tub can only fleetingly revive Madman's weakening pulse. Director Joe Giannone might as well be a used car salesman making his first film - the utterly dreary and pedestrian direction does not indicate he's qualified to step behind the camera. Even the gore is lacking - some people get axed in the face, maybe somebody gets their throat slashed. But the film is lacking any inspiration whatsoever, even in just a line of dialogue, crazy maiming, or perverted psychological explanation for the killer. It's hard to hate the film because it does absolutely nothing other than lie on the screen, playing dead and silently mocking anyone who was tricked into paying money or spending time to see it.

Posted by Clayton Dillard at 4:08 PM