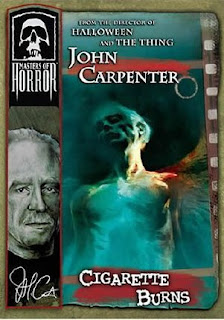 John Carpenter's Cigarette Burns takes one of the most fundamental cineaste quests and heightens it to apocalyptic levels - to see the most volatile, subversive film ever made. Here, that film, (appropriately referred to by pretentiously delighted film buffs in its original, French language title Le Fin Absolue du Monde), has the capability to make the viewer erupt into immediate violence, against both himself and others (it's clear that Pasolini's Salo serves as the inspiration for this idea, especially since Pasolini was murdered only two weeks after its release). Udo Kier plays a wealthy collector who hires debt-owing movie theater owner Norman Reedus to track down what is believed to be the film's only surviving print. Fitfully, Cigarette Burns is more Gialli than slasher, following Reedus through a series of ill-fated leads and dangerous interviews. It's no coincidence either that Reedus' own theater shows Profondo Rosso (affectionately known to me as Deep Red) to bridge this idea. Yet Cigarette Burns isn't simply a film buff's circle-jerk of references and self-reflexivity - it's more about the price of art (echoing the final scream of De Palma's greatest achievement, Blow Out), metaphorically speaking, and the potentially damaging consequences that must be faced when it crosses the line. When does art become pornography or propaganda or a tool for violence? Or are they all one in the same?

Posted by Clayton Dillard at 7:44 AM