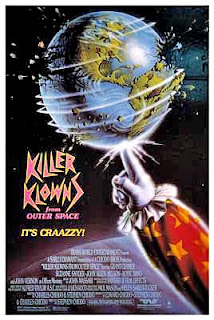 It may seem hypocritical to castigate something like Night of the Creeps then laud Killer Klowns from Outer Space, but that view point would be mistaken. For here, amidst wall-to-wall self-awareness and (funny) one-liners, the heroic like-minded geeks of the former die while goofing around on the CV of an ice-cream truck, hurled into the air by a giant, scary clown (only to be, unfortunately, resuscitated). Moreover, Stephen Chiodo's sly Reagan-era funhouse of laughs, frights, and ice cream strikes a consistent, well-rounded chord, intentionally silly but infused by a predilection for the bizarre, embodied in both its eight-foot alien clowns and how they are used, not just as a goof for self-important yucks, but inspired figures for a culture swaying between adolescence and adulthood. Not only is that conflict still ongoing - it would be naive to suggest it isn't regressing towards the former. Nevertheless, Chiodo makes an even more potent concoction of horror and laughs than The Return of the Living Dead, clearly the film that serves as Killer Klowns' inspiration. 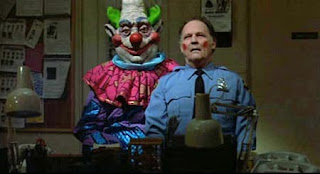 Killer Klowns starts out on a refreshing note; grumpy asshole police officer Mooney (John Vernon) scoffs at a couple of passing punks. The conflict has begun: evolving mores vs. conventional, rigid adherence to law as merely an excuse to disguise individual self-doubt. Mooney gets nothing but derision from Chiodo; a later decision to ignore logic and empirical data in favor of stubborn dogma brings about his demise. The other storyline involves young couple Mike (Grant Cramer) and Debbie (Susan Snyder), sexual but self-aware (like the film) and able to remove themselves from passive laziness to investigate the landing of a shooting star. Cramer speaks like a second rate Matthew Broderick, cool but modest. Likewise, Debbie is sexy and smart. After Mike does a dumbass Indian imitation, she responds: "Lead the way, Chief Running-at-the-Mouth." Funny, not overstated, and not even campy. All of this set up leads to the discovery of the clowns, their tent decked out in full-on ultraviolet glory. The sets look somewhat cheap, but Chiodo milks it well, playing it partially jokey, partially earnest. In one of the film's best scenes, a clown makes shadow puppets on the wall, drawing the smiling admiration of a blue-haired old lady and her husband. The figures start cute, turn progressively violent, then finally devours them. In spite of the presence of a killer klown, the metaphor is strikingly clear: danger now takes the form of what was formerly safe, smiling, and innocuous. In other words: Reagan as abject, his smiling, handsome face promising comfort, but truly bringing pain, torment, and death. That Killer Klowns from Outer Space can construct such a striking social allegory amidst the loony bits is highly impressive. There are funny touches too; the clowns wrap their victims in cotton candy cocoons; their guns shoot carnivorous popcorn. Even creepier, the clowns quickly construct a search dog as a balloon animal. Funny gags, to be sure, and they supplement character development. After all, the social subtext is nice, but the likable characters are really what gives it gravity. The conclusion remains regrettably somewhat standard, but the preceding intelligence and wit is not altered.

Posted by Clayton Dillard at 6:50 PM