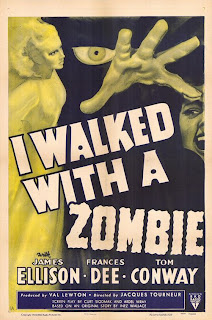 The most underrated director of the 1940's is unquestionably Parisian born Jacques Tourneur - a virtuoso socio-expressionist whose best films (Cat People, The Leopard Man, Out of the Past) remain undervalued as pioneering works in both horror and film noir. I Walked with a Zombie belongs somewhere near those masterworks, especially because of its astute balance of visual semiotics and cross-cultural discourse. Gravitating towards Venetian blinds and deconstructing exoticist inclinations, Tourneur's duality is apropos, channeling poetic realist sensibilities via a narrative of geographical and religious displacement.

Based loosely upon Jane Eyre, Betsy (Frances Dee) is sent to the West Indies to care for the sick wife of a plantation owner (Paul Holland). Reticent of leaving snowy Canadian modernity, Betsy is persuaded by the notion of "palm trees," a fetishization of her privileged, ethnocentric projections. Once there, her culture shock resonates through a confrontation with the voodoo practices of the locals, conjoined with the hegemonic deceit of colonialist whites. I Walked with a Zombie is an astonishingly concise (68 minutes) explication of horror iconography, social unrest, and religious discord, deeply complex in its conjunction of various discursive elements. 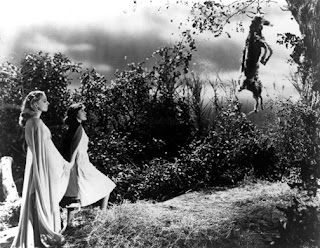 Posted by Clayton Dillard at 11:03 AM