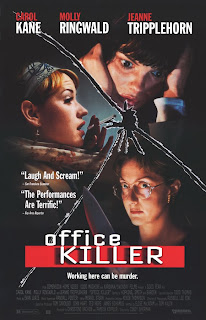 The misunderstanding of the satirical horror film stems from a confusion of subversion with incompetence, archetypes with cliches, and laughs with camp. The rhetoric of its detractors often resides within the latter categorization, misinterpreting distinctive stylistic choices as a failed attempt to engage the genre's more prevalent discourse. Nothing less than subversion should be expected from Cindy Sherman's Office Killer, a horror film that in no way intends to be scary, suspenseful, or cathartic. To Sherman, these things are silly. Like Paul Morrissey's great horror takedowns Flesh for Frankenstein and Blood For Dracula (but nowhere near their delirious brilliance), Sherman's film uses genre tropes, film history, and satire to deconstruct horror's ritualistic thrill, revealing its pretenses to be often dishonest and purely spectatorial.

Carol Kane's office recluse Dorine must reconcile her traumatic past when confronted with new age technology: the computer (and, subsequently, email). Michael Imperioli's Daniel waxes poetic about the machine's power: "Some people prefer it to actual contact with other people." Namely Dorine, who's manipulation through email deception allows her to knock her co-workers off one by one, assembling a "family" in her basement, taken away by her father's sexual abuse and mother's overprotection (to say that Sherman explicitly references Carrie and Psycho should go without saying). The wit in Sherman's understated film (and thus an explanation for its critical rejection) comes not through visceral jolts or smart-assed exchanges, but the conglomeration of theoretical ideas, highlighted in Kane's mousy serial killer, who's a Final Girl of a different color - and nothing in the film's resolution diverges from it. Sherman's insightful reworking will go unappreciated by those who can only recognize the film's campy underlyings.

Posted by Clayton Dillard at 11:13 AM