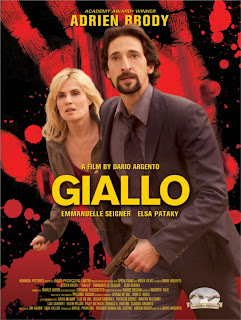 In Dario Argento's latest film, he apparently thinks he's making an episode of CSI. At least, that's what his visual approach would indicate - bland, non-descript,and lacking any vitality whatsoever, the once virtuoso master of mise-en-scene apparently doesn't give a fuck anymore. The bulk of Giallo reinforces this, a weak wrting/directing effort bolstered only by a game effort from Adrien Brody (who is now suing the film's producers, claiming he was never paid for his work), whose stern face and determined detective blur a bit of the material's questionable nature.

In spirit, the narrative recalls Tenebre; a deranged killer living in Torino stalks female foreigners, captures them, and kills them. He's revealed to have a medical condition which turns his skin yellow (thus the double meaning of the film's title). Linda (Emmanuelle Seigner), fearing her sister's capture after she disappears, seeks the help of Inspector Inzo Avalfi (Brody), who's carrying some demons of his own, natch. Turns out he saw his mother get butchered, then hunted down her killer...who happened to actually be a butcher, then waxed him. The backstory is supposed to give meaning to Inzo's plight, but since there's nothing going on in the film beyond the trite, it's hard to become invested. Brody gives it a go and, if there were any reason to see the film, it would be centrally to see him work. However, there is one bit of business that needs mentioning. Brody plays both the inspector and the killer. Yeah, it's obvious early on that the killer is Brody in make-up, leading one to believe somehow he's two people at once, but no. The film resolves as if they are two separate characters. Odd to no end, especially since the film makes nothing of it. Kind of like everything else in it, some mildly intriguing ideas going nowhere.
Posted by Clayton Dillard at 6:54 PM