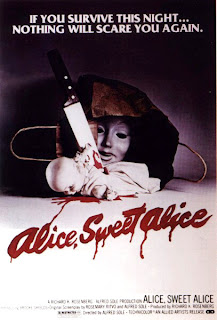 Alice, Sweet Alice is the worst kind of horror film. Self-seriousness, solemnity, a lack of humor, and religious piety all figure in. In other words - the tenants of an "art" horror film, not concerned with crudely modest allegory or visual prowess, but disguising latent psychological fascinations (child as monster, child sexuality, sibling rivalry) with a narrative packing squealing children, hysterical women, and other distasteful elements made all the more unpalatable because of that one critical affect: tone. Director Alfred Sole imposes no distinguishable feeling or stance on the material (no wonder he directed only two more films before becoming a full time production designer). It all just lies there, inert when not sonically and visually offensive. If it's pious tone is meant to be satirical (an incredibly, slovenly overweight neighbor hints as suggesting such a possibility), then Sole is just a sick fuck, playing the film's more lurid elements as masturbatory fodder for those who need to justify their seedier inclinations and indulgences with weightier pretexts.

Essentially, the film is one long screaming session (boring too). Little Alice (Paula Sheppard) kills her younger sister Karen (young Brooke Shields) during communion. She puts on a yellow raincoat and mask, strangles her, then drags her body across the church, the larger metaphor being that the religious are so blinded by their irrationally driven beliefs to notice that they, like Alice, are actually indulging primal, atavistic desires. Okay, fine. Yet the film has no displayable sense of humor regarding this statement. Obvious and blunt, Sole presents it with a sternness akin to the dogmatism he supposedly critiques. It's bad filmmaking. Every shot looks terrible. Pale colors, stupid ass lines (all serious), and no sense of kinetic movement or style.

The film's narrative revelations are of little concern; did Alice really killer her sister (and commit subsequent attacks) or is it someone else, passing herself off as Alice to attain revenge of her own? Or does anybody give a fuck? Alice, Sweet Alice prizes narrative first, revelations and a pretentious attempt to establish credibility as a realistic, thematically complex work. These are the ultimate horror film sins (most every genre, for that matter). Every horror fan likes to squirm, sure, but usually at the knowledge that what's being seen has a certain level of cognition regarding both its own value and an uneasy appreciation knowing that a director has mastered his material on multiple fronts. Sole's film bores, which is unfortunate enough, but his insistence on turning boredom into maddening, distasteful incompetence makes Alice, Sweet Alice one of the more unpleasant viewing experiences imaginable.

Posted by Clayton Dillard at 12:47 PM