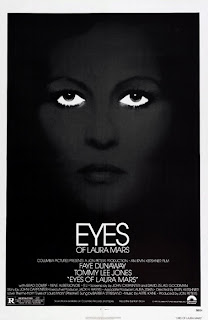 Though Eyes of Laura Mars was released a good two years before Dressed to Kill, it feels like a cheap, soulless retread, initially intriguing through a narrative of art imitating life (too literally, I might add), but director Irvin Kershner (two years before he directed The Empire Strikes Back) finds no way to give its insipid dialogue sequences any verve, life, or meaning. John Carpenter is credited with the story and having co-written the screenplay - likely meaning his initial script was rewritten by David Zelag Goodman (an accredited screenwriter in his own right). I have no evidence or anecdotes to back that theory up, but Carpenter's sense of narrative ingenuity has never relied on such blatant tactics, nor a killer who's woefully evident from the film's very first scene.

Photographer Laura Mars (Faye Dunaway) is releasing a new book of her work; it's being met with criticism by feminists, who claim her photographic art is violent towards and demeans women. Defensive, but persistent, Mars suddenly has a mental flash while shooting one afternoon: she takes the perspective of a murderer. Sure enough, her vision comes true, as do multiple others to follow, leading Mars to seek the comfort of reassuring policeman John Neville (Tommy Lee Jones). Kershner's technique for shooting Mars' delirium never transcends the literal: I-camera stalkings, another inferior rendition of what Carpenter would do in his own Halloween. Moreover, the film's central concern (looking, vision) remains static and uninteresting through its easy posturings and overtly explicit dialogue. There's no fluidity in style or cinematic wonderment here, that necessary element which makes De Palma so damned exhilarating.

Posted by Clayton Dillard at 8:02 PM